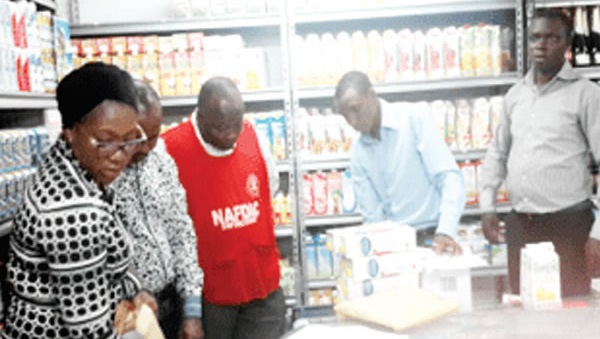 The National Agency for Food and Drug Administration and Control (NAFDAC) has announced the seizure of fake drugs worth N60 million from a warehouse in Lagos.

The Director General of the agency, Professor Moji Adeyeye disclosed this in a press statement on Monday.

Professor Adeyeye said: “Following a tip-off by a concerned citizen, officers of the Investigation and Enforcement Directorate of the NAFDAC and the police stormed the supermarket and warehouse owned by one Mr Nzube at the trade fair complex in Lagos.

“The warehouse was raided for possession, storage, importation, sales and distribution of dangerous and unregistered cosmetics.

According to the NAFDAC DG, the products were allegedly imported from China, Malaysia, the Philippines and Dubai.

“Five trucks of about 56 assorted unregistered cosmetic products, worth over N60m were successfully evacuated from the warehouse.

“The Glutathione injections and skin whitening pills are harmful and have several adverse effects including Stevens-Johnson Syndrome, skin cancer/melanoma, kidney dysfunctions and failure, as well as having an adverse effect on the liver”, she said.

Adeyeye also appealed to Nigerians to, as part of their civic responsibility, report suspected incidences of counterfeiting and adulteration of cosmetics, drug, food and medical devices to NAFDAC for prompt regulatory and legal actions.