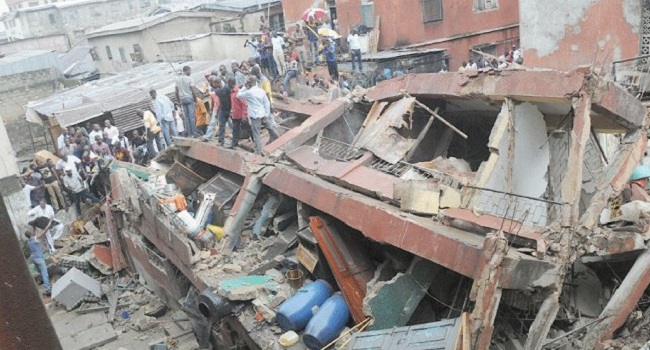 The Lagos State Government, has revealed that 283 distressed buildings have been detected across the state almost one month after a building collapsed on 63 Massey Street, in Ita-Faaji, Lagos Island, leaving 20 persons including pupils of Ohen Nursery and Primary School dead.

During a submission of report by the panel set up to investigate the immediate cause of the collapsed building on Massey Street, the Commissioner for Physical Planning and Urban Development, Rotimi Ogunleye, on Thursday revealed that 136 buildings were identified as distressed in Lagos Island division alone, while 60 weak structures were detected in Ikeja division.

Ogunleye also stated that an investigation carried out by Lagos State Building Control Agency, LASBCA, revealed that 33 distressed buildings were uncovered in Badagry division, 29 in Ikorodu division and 25 weak buildings in Epe division.

It was gathered that the Committee Chairman, Wasiu Olokuonla, who submitted the report, made a new revelation, stating that the committee discovered that the investigated building had more storey than the number publicly specified.

He added contrary to the reports in the media, the collapsed building on Ita-Faaji was not three or two-storey, the building was a five-storey structure

However, the Commissioner later assured residents that the out-going Governor Akinwunmi Ambode and his administration would ensure the panel report was carefully studied and approvals executed immediately.