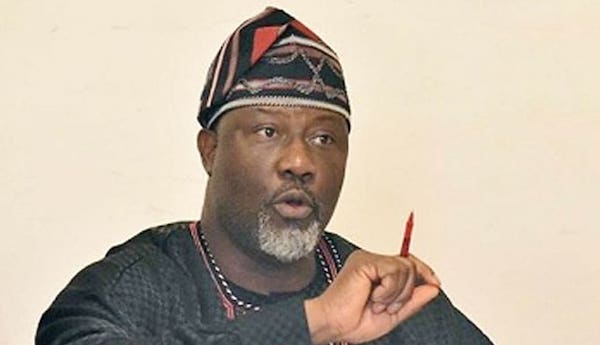 A former federal lawmaker, Dino Melaye, has reacted to the statement credited to the former Minister of Aviation, Fani Fani-Kayode, on the crisis rocking the Peoples Democratic Party (PDP).

The ex-minister had in a post on his social media handle asked the Federal Government and security agencies to take Melaye up on the statement credited to him on the emergence of Iyorchia Ayu as PDP national chairman.

Melaye had in a chat with journalists recently said all the PDP governors spent money at the party’s national convention held in December last year to ensure the emergence of the former Senate president as national chairman.

The PDP chieftain, who reacted to the ex-minister’s statement in a post on his Twitter handle, described him as attention-seeker.

He said: “My attention has just been called to a statement issued by Femi Fani- Kayode, which as usual, was an incoherent gibberish produced from his temporary relief from insanity. How can one explain his momentary consciousness to react to an interview long granted, if not that his world of reality is not in sync with the world of sound minds.

“His comment best was at best a mixture of prevarication, lack of comprehension and a voyage in meddlesomeness and idleness. Truly, an idle hand and heart like that of FFK is the devil’s residence. Ordinarily, his rambling would have been ignored, but in this age of unrestricted access to the media even by unwholesome minds, care must be taken to put issues in the right context and perspective.

“The roller-coaster FFK is merely seeking to receive attention, having employed all forms of ingratiation to be recruited by the presidential candidate of the Peoples Democratic Party (PDP), His Excellency Atiku Abubakar, but failed. To be sure, he contacted Timi Frank to help lobby for a job in the Campaign Directorate, but where is the record to help his desire? As a serial hustler around food dispensers, FFK’s misadventure into the issue of the leadership of the PDP is nothing but a subtle campaign to be noticed and rewarded by prospective paymasters.

“Nigerians cannot forget in a hurry how FFK bootlicked and cajoled Yahaya Bello during his presidential experiment, but later jumped to the presidential train of Senator Ahmed Lawan in the throes of the presidential primary election of the All Progressives Congress in an unabashed and unconscionable manner. Now that campaign structures have been formed by parties and he’s sidelined, having lost face everywhere, he has found the PDP as the access card to his next meal.

“The reality is that Prof. Iyorchia Ayu, a man of repute and impeccable political profile was supported by governors and members of the Party. It is not rocket science that though Prof. Ayu emerged by consensus, a convention was held and delegates were mobilised to Abuja.

“Is FFK so obtuse that he cannot understand that delegates could not have trekked from everywhere to Abuja without being transported? Has he not recovered well enough from the doses administered during his rehabilitation to understand that Governors and other leaders supported delegates from all states to the National Convention? Is he equating the sound mind of Judges with his own reprobate mind that he’s threatening to go to court over a matter that he has neither locus nor a reasonable cause?

“Often when the issue of FFK comes up, I easily recall the time-standing analysis by President Olusegun Obasanjo of his personality and the assertion that food is FFK’s price. His likes are appropriately described in Philippians 3:19, as belonging to the class of those ‘ whose god is their belly, and whose glory is their shame. Sorry, PDP has no food for the lazy!

“And knowing FFK’s reputation for political scavenging, let me also ask him the unanswered question. FFK, who bankrolled your statement?”