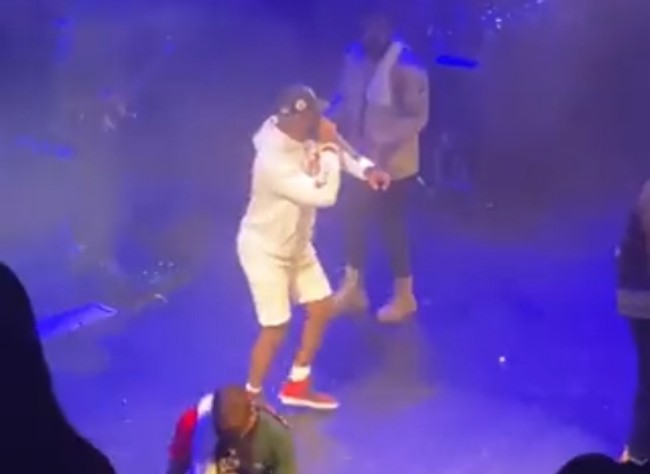 Nigerian recording artiste, Kizz Daniel has been slammed by fans for failing to show up early at a concert in the United States.

The ‘Buga’ crooner who is currently on tour in ten states in the United States was scheduled to perform in Silver Spring, Maryland on Thursday night. However, Kizz Daniel reportedly kept the audience waiting for over four hours.

It was gathered that the self-acclaimed Vado The Great failed to apologize to the concert-goers for appearing late; also, Kizz Daniel delivered a twenty minutes performance that further infuriated the audience.

In the trending video, livid fans were seen throwing cups, tissues and other objects at the singer as he performed some of his songs. Unimpressed by his lack of professionalism, some of the concert-goers began chanting and demanding ‘refund’, ‘refund’, ‘refund’.

Here is a video of the incident.

Right! But by the time Kizz Daniel gets there, the whole thing would have been over already 😂💔 https://t.co/CM7UuBUsUz

Kizz Daniel showed up late to his show, he kept concertgoers waiting for 4 hrs & got dragged to filth on stage, that's what I expect from Nigerians whenever an artiste is not punctual cos these artistes especially the A-listers take Nigerians for granted a lot. Thank u, USA fans.

Kizz Daniel count your fucking days. Shitty management, shitty performance. Even Olamide didn’t do this and he was late too.

This is why Kizz Daniel is trending this morning pic.twitter.com/8NbakNqe5O

Kizz Daniel was 4 hours late to his show in USA only to perform for about 30 mins & the crowd weren’t having it. Papers & cups were thrown on the stage as they screamed “refund”. Very typical of Nigerian artists when they have shows at home & as they say ‘charity begins at home’.

People keep asking why Kizz Daniel is not up there with the likes of Davido, Wizkid & Burnaboy

The reason is because he keeps behaving like Portable.

1. He rejected flower in Zimbabwe – who does that?
2. Delayed fans who paid for his show in US for more then 4 hours.

Lady drags Kizz Daniel for showing up 4 hours late to his show.

they waited for kizz Daniel for 4 hours and he only performed for 20 minutes with DJ playing his songs and him chewing his mouth close to the mic.🤦‍♂️🤦‍♂️
this is a disgrace to kizz Daniel and his management and not to afrobeat. all these studio artists sef. pic.twitter.com/JAO9lGWSrZ

Man's a lazy AF performer. He can sing, he can write but don't pay to see Kizz Daniel. Don't. He doesn't care if you have a good time or not. He's been like that since his second single blew.

I love how Nigerians 🇳🇬 in the USA 🇺🇸 requested a refund after Kizz Daniel only performed for 30 mins, despite coming 4 hours late to the show.

He thinks it's here in Naija that they treat fans like thrash and get away with it.

Kizz Daniel 😂 you carry your Naija attitude go Abroad.. Thank God they asked for refund.. You better give them back their hard earned money or suffer bad reputation abroad