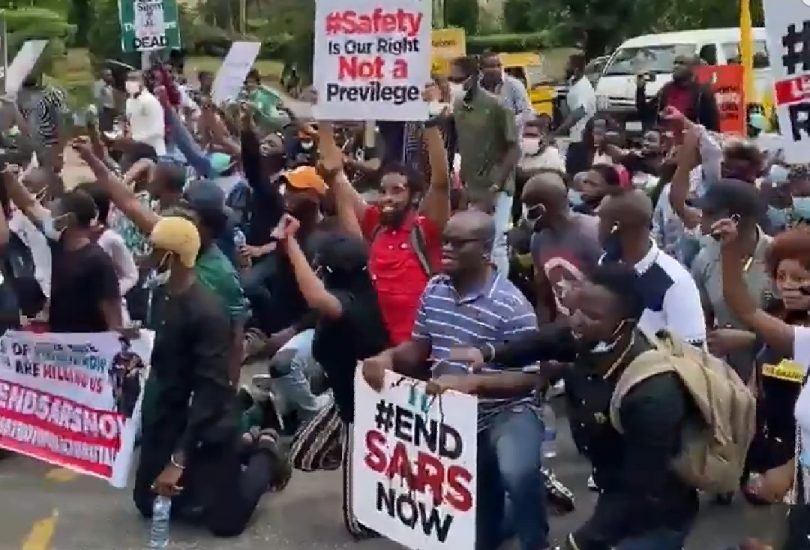 Football fans across Nigeria have charged the Super Eagles of Nigeria to show their support for the #EndSARS protests currently ongoing in parts of the country.

The protests, which began early this week, has continued for days, with groups of youths calling for the scrapping of the Special Anti-Robbery Squad (SARS) of the Nigeria Police Force.

The unit, which is supposedly created to combat armed robbery and related criminal activities, has been reportedly involved in several dirty duties that have claimed lives of alleged innocent citizens and landed others in jail for non-criminal offences.

The Super Eagles are set to face the reigning champions of Africa, Algeria, in an international match in Austria on Friday night, and fans on social media have called for their show of support.

Hello @thenff, can you please tell the kit manufacturer of the Super Eagles to add “#EndSARS” in front of our jersey for tonight’s game against Algeria. Let the world know that this is not a joke anymore.

Please RT until they see it!

Read Also: #EndSARS: Celebs, others pass the night at Lagos House of Assembly in protest

The football world, and indeed the world of sports, showed their support during the #BlackLivesMatter protests months ago following the death of George Floyd from police brutality.

Nigerian fans have now called the national team to show solidarity, as youths protest against police brutality in the country, calling for a reform of the force.

Tonight we take on Algeria in an international friendly match. Please help pass the #EndSarsProtests #EndPoliceBrutality to the whole world. #EndSARSImmediately

Nigerians, Retweet if you agree! 🔃 pic.twitter.com/a6CKIU3t1Y

The Super Eagles will take on the North Africans from 7:20p.m Nigeria time.