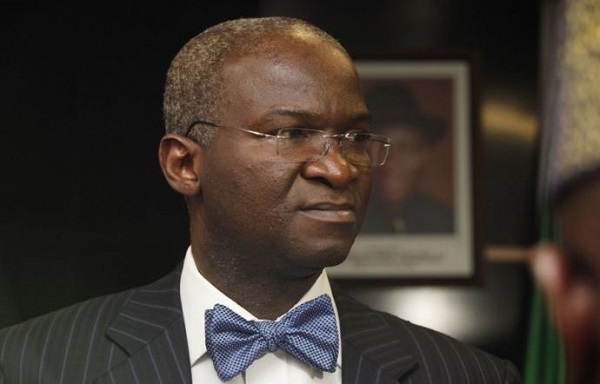 The Minister of Works and Housing, Babatunde Fashola, on Thursday challenged Nigerian senators to make road rehabilitation and construction their constituency projects.

The minister threw the challenge when he appeared before the Senate Committee on Works at the National Assembly complex, Abuja, appealing to them to collaborate with the executive in the Federal Government’s drive to tackle the nation’s infrastructural challenges.

According to the minister, senators from a geopolitical zone could come together and adopt a major Federal Government road, as their joint project.

Fashola also said that the revenue acruable to the Federal Government was declining at a time that infrastructural demands were high.

He said: “We must take hard decisions, if we must improve our infrastructure.”

Defending the slow pace of ongoing road projects, Fashola said the parliament held the key to the development of the country.

He said: “If the parliament go on oversight, they should be able to raised alarm about things they see going wrong,

“We need to take hard decisions. This committee is made up of former governors and high ranking lawmakers.

“If you need to shake the table, let’s do it,” Fashola said, adding that the lawmakers must understand that the private sector would always want to make profit.”