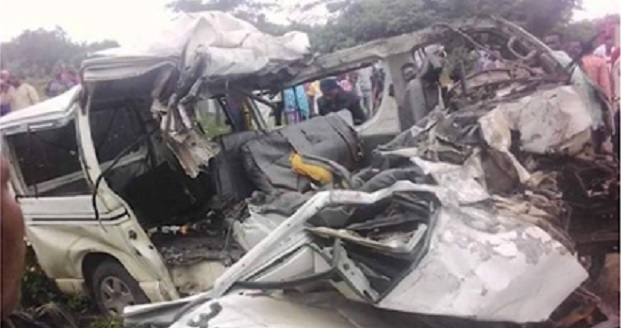 15 persons have been confirmed dead in a fatal road accident that occured on Friday along the Maiduguri-Damaturu Highway.

The accident involved two Sharon mini buses, which had a head on collision, conveying 15 persons, including the two drivers

The accident was confirmed by the Borno State Sector Commander of the Federal Road Safety Corps (FRSC), Mr Sanusi Ibrahim.

According to Ibrahim, the accident occurred near Mainok village of Kaga Local Government Area, adding that all the corpses had been taken to the General Hospital, Beneshiek, the headquarters of Kaga local government.

He said: “I just got the report from our unit in Beneshiek that two sharon buses carrying 15 passengers including the drivers were involve in a fatal collision and that all the 15 people in the two buses died.

He further disclosed that the driver of one of the buses lost control because of a burst tyre leading to the collision.

Ibrahim appealed to motorists to always observe speed limit and other road safety regulations to minimise such fatal accidents.