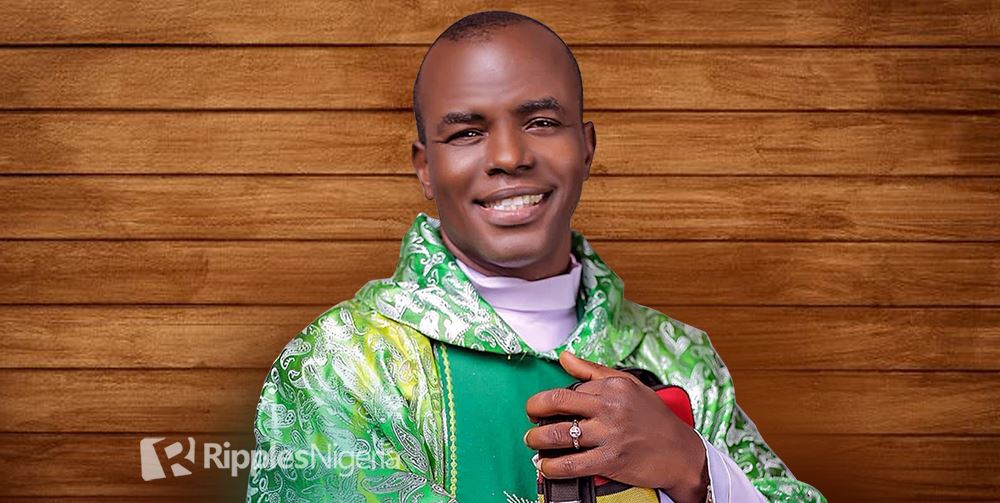 Controversial Catholic priest and Spiritual Director of Adoration Ministry Enugu Nigeria (AMEN), Rev. Fr Ejike Mbaka, has been removed as the head of the Adoration chaplaincy a few days after a three-month suspension slammed on him by the Enugu Catholic Diocese was lifted.

In his place, a new priest, Fr. Anthony Amadi has been appointed to be in charge of activities and officiate liturgical duties at the Ministry.

Fr. Mbaka has however, been reportedly sent to a monastery, an exclusive community for the preparation of monks and nuns.

The announcement was reportedly made during the Sunday mass with the introduction of Fr. Amadi which was said to have sparked outrage with many of Mbaka’s followers rejecting the new appointment.

A church member said some of the Adoration faithful have vowed that no other priest would be welcomed to the Chaplaincy apart from Mbaka, alleging a gang-up from certain quarters in the church against him.

The suspension of Mbaka which was lifted last Thursday, was announced by the Bishop of the Enugu Diocese of the church, Catholic Bishop of the diocese, Most Rev Bishop Callistus Onaga in June over comments he made against the presidential candidate of the Labour Party, Peter Obi.

Fr. Mbaka had gotten into trouble when he described Obi as a ‘stingy man’ which raised serious outrage and condemnation leading to the suspension.

A letter banning Mbaka from conducting activities at the Adoration Ground had read:

“In the light of the happenings in the Catholic Adoration Ministry Chaplaincy Enugu; capable of undermining the Catholic faith and teachings; and after several fraternal corrections and admonitions to Fr. Camillus Ejike Mbaka, the Chaplain of the Ministry; and after having given him pastoral directives and guidelines for the Ministry Chaplaincy, which he persistently violated.

“And in fulfilment of my pastoral duties as the Chief Shepherd with the obligation to promote and safeguard the Catholic faith and morals in Enugu Diocese, I hereby prohibit all Catholics (clergy, religious and lay faithful) henceforth from attending all religious and liturgical activities of the Catholic Adoration Ministry until the due canonical process initiated by the Diocese is concluded.

‘Buhari will secure Nigeria, make it safer before leaving office’ —CoS, Gambari