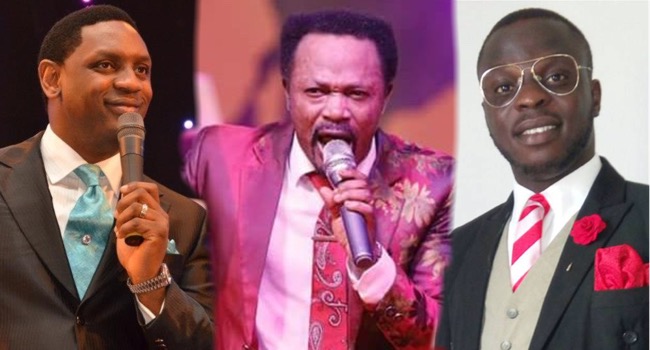 “That you are in church does not mean you are saved, the church is only a spiritual clinic and many of its patients are not responding to treatment, including the clergy,” a social commentator, Tosin Ayo said while reacting to the latest sex scandal rocking the church in Nigeria.

In recent past, the House of God has been hit with its fair share of sex scandals with Pastor Abiodun Fatoyinbo of the Commonwealth Assembly Church (COZA) receiving negative buzz in torrents over rape allegations leveled against him, by Busola Dakolo, wife of R&B singer, Timi Dakolo.

The travails of the embattled man of God has even been made worse after a second victim who was apparently buoyed by the tale of Busola Dakolo and an earlier expose by Ese Walter, revealed how Pastor Fatoyinbo allegedly took advantge of her.

Like Busola and Ese, the yet-to-be identified victim claimed, that she had also come to share the near rabid adoration COZA members have for Fatoyinbo.

Last year, a Canadian based stripper and musician Miss Stephanie Otobo made the headlines when she accused Apostle Johnson Suleman of the Omega Fire Ministries of having a sexual affair with her.

Miss Otodo had alleged that she had an amorous affair with Apostle Suleman, in which she got pregnant, and that he promised to marry her, but the cleric later allegedly dumped her.

However, Miss Otobo made a surprise visit to the Omega Fire Ministries where she made a surprising confession in front of the congregation, saying she lied against Apostle Suleman.

Many later thought that Miss Otobo may be out of her mind when she appeared days later in another video after jetting back to Canada, claiming she was forced by Apostle Suleman to make the confession in his church, saying she still stood by her earlier claims.

In the same vein, a woman has come out of her closet to reveal that she was allegedly sexually molested by the founder of The Synagogue, Church of All Nations, T. B. Joshua.

In a short video, the lady who documented her experience in a book titled ‘TB Joshua I Know… Deception of the Age Unmasked’ claimed she was able to escape from TB Joshua, a pastor whose church runs its video on Emmanuel TV television station from Lagos, after 14 years.

But like Miss Otobo, the woman was seen in another video a day after in the presence of the founder of the Synagogue Church of All Nations( SCOAN) TB Joshua saying she has come back as a prodigal daughter because she has acted as an enemy of God, rather than a friend, by false accusations.

Moments later, the SCOAN in a statement, later identified the lady as Bisola Johnson describing her as a mentally ill lady who has been parading herself as a victim of rape by the man of God, in the light of Biodun Fatoyinbo’s case.

However close watchers and critics posit that she may have been forced to retract her statements, as a mentally ill woman couldn’t have taken pains to document her experience in a book.

Charming Abuja-based pastor, Joshua Iginla, of the Senior Pastor of Champions Royal Assembly, left many in shock when he admitted that he and his wife, Yemisi, had children out of wedlock.

Pastor Iginla dropped the bombshell early this year while addressing his congregation during a Sunday service, when he said his wife brought an illegitimate child into their home.

According to the clergy, he forgave his wife for what she did, but she refused to forgive him when he somehow mistakenly had a child with another woman out of wedlock.

The man of God later announced that his marriage to Yemisi had crashed because he made the mistake of having a baby mama Stella Zimasa Ndamase, who he later got married to recently and is pregnant with his second child.

Pastor Iginla’s estranged wife Yemisi has severally come out to call him unprintable names and once called him the ‘real devil’ as she is apparently yet to forgive him for having a love child.

But a school of thought suggests that Pastor Iginla may have cheated on his wife to test her faith because as the clergy said earlier, he forgave his wife when she brought an illegitimate child into their home, but she refused to return the favour when he also had a child with another woman.

The leader of Zionwealth of Life Assembly in the Lekki area of Lagos was also rocked in a sex scandal when he revealed in a series of posts online that he and his ex-lover Tamaratokoni Okpe have more than 10 recorded sex tapes.

According to Apostle Chris Omatsola who scribbled the post on his blog, Zionweath News, he and Tamara had more than 10 sex videos on their phones, as she mostly enjoyed filming their intimate moments.

Apostle Omatsola claimed the initial sex video between them was leaked to blackmail him, while Okpe claimed that the clip was released to force her into marriage with her former lover.

Okpe who dated Apostle Omatshola for seven months in 2018 (a time when they both had sexual intercourse) said her ex-lover had threatened to leak the video after she quit the affair.

While the estranged lovers traded blames on social media over the scandalous leaked video involving both of them, many wondered the rationale behind exposing such a video in the public domain as the claims made by the pair as reason the video became public, showed they were both trying to get at each other.

Another victim narrates how Pastor Fatoyinbo allegedly raped her (Video)