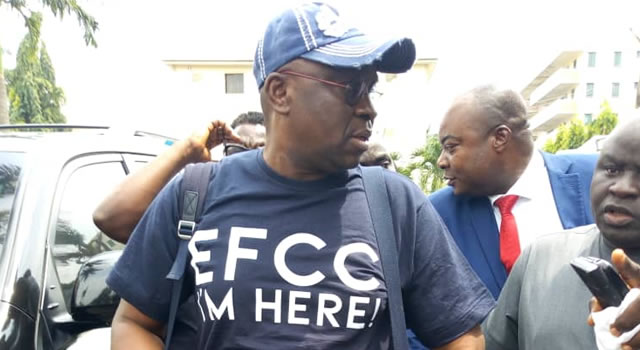 Former governor of Ekiti State, Ayodele Fayose, has arrived the office of the Economic and Financial Crimes Commission (EFCC) to honour a summon by the anti-graft agency.

His spokesman, Lere Olayinka, disclosed in a terse statement on his Twitter handle.

Olayinka’s tweet came few minutes after Fayose had in an earlier tweet wrote, “In few minutes, I will be at the EFCC old office, Wuse 2, Abuja.

“I’m a man who stands by his words and I hope that after today, those President Buhari’s men that have been accused of corruption will also be bold enough to submit themselves to the @officialEFCC.”

Fayose, whose tenure expired midnight on Monday, had earlier also said that he would be at the EFCC office with bedclothes and pillowcase.

Fayose was summoned by the EFCC for interrogation over the allegations that he received about N1.3 billion from the office of the former National Security Adviser (NSA), Sambo Dasuki, through the then Minister of State for Defence, Senator Musiliu Obanikoro.

The EFCC had waited for Fayose’s immunity to end before his interrogation.