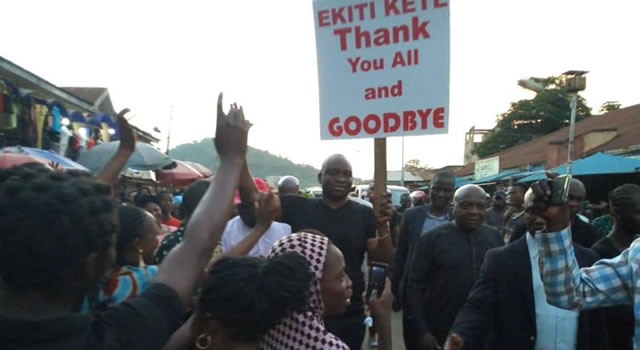 Peter Ayodele Fayose, the outgoing Ekiti State Governor, on Sunday left the state for the Abuja office of the Economic and Financial Crimes Commission, EFCC.

Fayose, who walked the streets of Ado Ekiti in a farewell match on Saturday, also insisted that he cannot be cowed by anybody.

While on his way to the Akure Airport to board a flight to Abuja, tears rolled down the cheeks of many who lined up the streets to bid him farewell.

Fayose’s second tenure as governor ends at midnight on Monday (today). He is expected to be a guest of the EFCC on Tuesday by 1pm.

At a thanksgiving service held at the Government House Chapel, Fayose, in an emotion-laden voice, thanked the people for their support, telling the people that he would always be with them, urging them to trust in God for a better future for him and the state.

The event was attended by traditional rulers led by their Chairman and Oloye of Oye-Ekiti, Oba Oluwole Ademolaju, and the Ewi of Ado-Ekiti, Oba Rufus Adejugbe.

Also at the event were the wife of the governor, Feyi; the outgoing Deputy-Governor, Prof. Kolapo Olusola, and his wife, Janet; the Chief of Staff, Dipo Anisulowo; Head of Service, Dr Gbenga Faseluka; the Secretary to the State Government, Mrs Modupe Alade; former Speaker, Kola Oluwawole; members of the national and state assembly, and members of the cabinet, among others.

At the event, Feyi said her husband would come back to Ekiti a triumphant man.

“We are coming back; I don’t know how but I have 200 per cent assurances,” she said.

Fayose, who insisted he was leaving a fulfilled man, said: “I’m contented, I’m happy and I say thank you. Don’t be disparaged, don’t worry about me, I will come back. I will rise to the glory of God. I have enjoyed uncommon grace; I will never complain but thank God.”

Fayose also appealed to the impeached Speaker of the House of Assembly, Kola Oluwawole, not to fight back.

“I don’t want you to trouble your mind, there won’t be testimonies without battles. Go and concede defeat in the overall interest of Ekiti. You were removed illegally but let God fight for you.”

Speaking at the Akure Airport, Fayose said he was not scared of the detention of the anti-graft agency, adding that he wanted to go the EFCC deliberately in order not to give the impression that he would flee after handing over to his successor.

“So, after a meritorious service, anybody who wants to call me to question, I’m available to them, just one call away and my going now is my demonstration to them that I’m a man of my words.

“I’m not scared of anything. I always say to the people that the life of a man does not consist in the abundance of what he has. Life is for the courageous, not for the weak. I have served well, I have defended the common man in this country and I will continue to defend them.

“I will never be cowed by anybody. It is important to speak truth to power; I will not allow myself or any Nigerian to be oppressed.”

Fayose also declared that he remained the leader of the people of Ekiti State and would continue to defend them.

“In or out of office, I am always their leader. Ekiti comes first above everything and anybody and we will continue to defend our people”, he said.