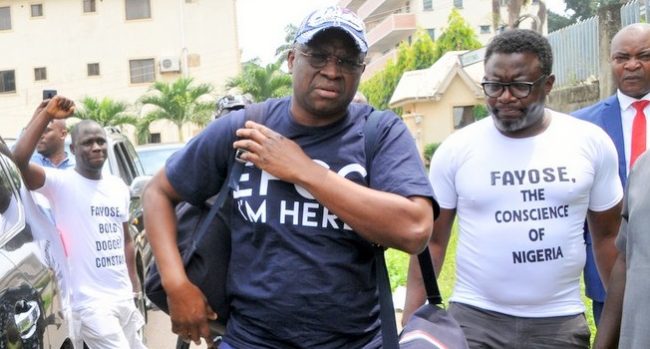 Former Governor Ayodele Fayose is to spend the next two weeks in detention as the Economic and Financial Crimes Commission (EFCC) has obtained a remand order from a Federal Capital Territory High Court to keep him.

According to a source within the anti-graft agency, the remand order is also subject to renewal. Meaning he could remain in the custody of EFCC longer than two weeks.

The source said: “We have obtained a court order to hold Fayose for at least two weeks pending investigation. He could be released earlier or later than two weeks depending on the outcome of investigation.”

Fayose surrendered to the EFCC on Tuesday, less 24 hours after the expiration of his tenure as the governorship of Ekiti State

The EFCC is probing him for allegedly receiving N1.3billion from the Office of the National Security Adviser through a former Minister of State for Defence, Senator Musiliu Obanikoro, during the build-up to the 2014 governorship election in Ekiti State.

Other EFCC sources however disclosed that Fayose is being investigated for other corruption related crimes. These include allegedly receiving kickbacks from government contractors through his aide, Abiodun Agbele, who is currently standing trial for fraud.

A source said: “We have many cases against Fayose being handled by three different teams. We cannot just arraign him immediately. We want to do a thorough job before taking him to court.”

The former governor’s lawyer, Chief Mike Ozekhome (SAN), has however threatened to sue the anti-graft agency for breaching Fayose’s fundamental human rights if it failed to release him today, Thursday.

Ozekhome also said since the EFCC began investigating Fayose over two years ago it is surprising that the agency would decide to hold him for over 24 hours.

He also insisted that the commission could not force Fayose to write any statement as he reserved the right to remain silent, adding that any move to obtain a remand order would amount to illegality because the Supreme Court had made that clear.

“His lawyers will consider approaching the court for the enforcement of his fundamental human rights if he is not released on Thursday. Section 35 and 36 of the constitution are clear on this.

“He is not a flight risk. He willingly submitted himself to the EFCC even earlier than the time he was supposed to come. What the EFCC is doing is nothing but media trial.

“From the way they have been chasing Fayose in the last three years, one would have expected that the EFCC would have completed its investigations and would arrest him immediately his tenure expires and charge him the next day but that is not the case.

“They want him to write a statement by force and then use the statement against him instead of using their own evidence”, Ozekhome said.