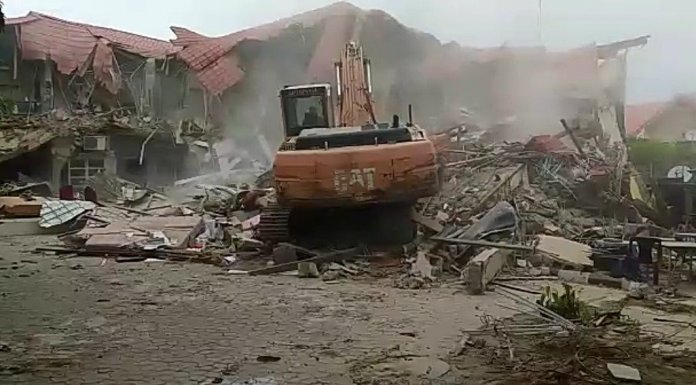 Barely a month after raiding the club, the Federal Capital Territory Administration (FCTA) has demolished Caramelo, a popular night club in Abuja.

The exercise, was sequel to a 48-hour final demolition notice, following the issuance of a revocation letter to the operators by the Department of Lands Administration of the FCTA.

According to FCTA, it demolished the club because it was located in a residential area and the use of the building violates Abuja Master Plan.

Coordinator of Abuja Metropolitan Management Council, an FCTA agency, Umar Shuaibu, had told journalists the plot where the club is built was oroginally zoned as a health clinic.

He had said the club was raided following complaints from residents on alleged nuisance, leading to a surveillance in the area.

“The outcome of the surveillance revealed that the complaints are genuine and real. Please note that the substance of these complaints include, noise nuisance from loud party music, nude/strip dancing club activities intractable traffic challenge, resulting from uncontrolled patronage to the commercial nightclub within the residential precinct,” Shuaibu said.

Shaibu lamented that the operation of Caramelo Lounge had constituted a social nuisance in the neigbourhood and had become inimical to provisions of Abuja Masterplan arising from incessant noise pollution, on street parking and insecurity, among others.

He disclosed that despite being served with quit notice and contravention letters since 2016, the operators failed to revert and continued with the nightclub and other commercial activities on the plot.

Managing Director of Caramelo Lounge, Max Eze, expressed disappointment at the demolition exercise. He said the owners were taken aback by the short notice to vacate the property, which he valued at over N100million.

Although, he admitted to the conversion of the original land use, Eze said the management of the Lounge had been paying millions of Naira

Recall that about 27 women were arrested for prostitution during a raid on Caramelo club by a task force raised by the FCT Ministry.

The arrest of the women had spiraled into a controversy as some of the women alleged that they assaulted and raped by law enforcement officers.

Following the allegation, the FCT police Command has set up a team to investigate the allegations of rape levelled against some of its personnel.