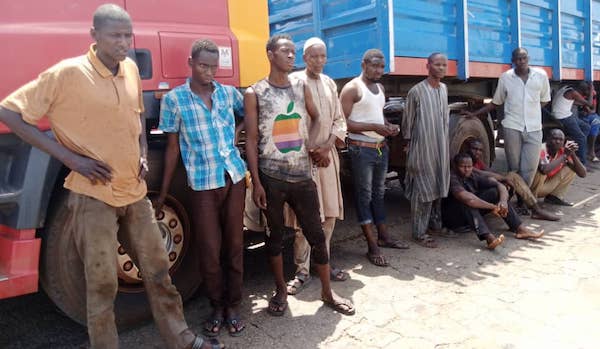 There is apparent tension in Abia following the reported interception of a cattle truck with Almajiris hidden inside, on its way to the state.

It was learnt that Abia State Homeland Security agents led by the Commissioner for Homeland Security, Prince Dan Okoli intercepted the Almajiris hidden in cattle trucks at Enugu-Abia border, along the Enugu – Aba Highway.

Confirming this in a statement, Abia Commissioner for Information, Chief John Okiyi-Kalu, said that overnight, several trucks conveying food items with several Almajiris hiding in them were turned back at the same border until the interception on Tuesday.

He said that the state government had, following the discovery, directed that more homeland security agents be deployed to one of the borders with Akwa Ibom State because of the interception of another truck conveying Almajiris alongside goods destined for Akwa Ibom State.

It was learnt that the interception of the Almajiris came after the state government on Monday raises an alarm over claim that some people planned to move a group of Almajiris into the state within the next 24 hours.

There have been reports of many Almajiris evacuated to their states of origin testing positive to the dreaded COVID-19.

It was learnt that many residents in Abia State were currently afraid that some Almajiris might have entered the state undiscovered.

However, Okiyi-Kalu said that the state government had warned that traditional rulers and Transitional Committee (TC) chairmen of inter-state boundary communities would be held accountable and sanctioned should there be any unauthorised entry into the state.