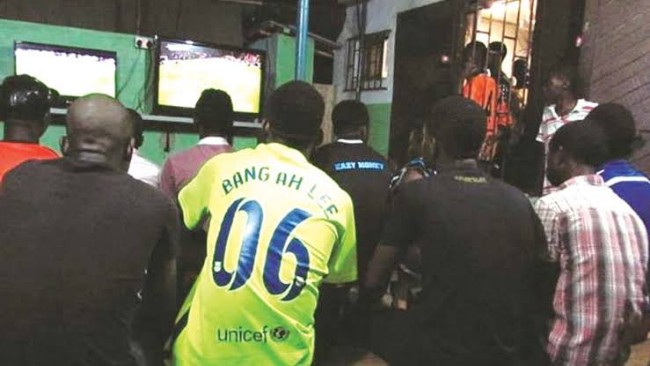 Chuckwu Raphael, an ardent Chelsea football club fan, hoped his team could stage a dramatic comeback in Real Madrid’s Santiago Bernabeu Stadium on 13th April, after the former already suffered a three against one goal defeat in the first-leg tie of the Union of European Football Association (UEFA) Champions League quarter-final. On this day, he glued his eyes to the television, watching and praying.

Raphael sat inside a bustling viewing center at Gidan Igwe, Sokoto amidst fans of different football clubs who threw banters at him every time. As the match kicked off and minutes started counting on the television screen, his heart palpitates. His hope seemed actualised when England International and midfielder, Mason Mount eased up the pressure for Chelsea fans as he put the Blues in a one goal lead before the first half break. Finally, the comeback was completed in the 75th minute with Antonio Rudiger and Timo Werner’s goals.

With palpitations turning to jubilation, Raphael talked back to other fans. But, five minutes later, Real Madrid’s right-winger, Rodryo started the foundation of Raphael’s emotional breakdown that night, when the Brazilian young star volleyed in an immaculate pass from Luka Modric to force the game to extra-time with 4-4 on aggregate.

On resumption, Karim Benzema, Real Madrid’s main striker and captain scored with a header to wrap up the match with a 5-4 win on aggregate, a win that eventually saw the defending champions, Chelsea, off the race.

“I can’t remember a football match that made me feel worse than that because we gave our all in that match and we were so close to wrapping it up before it slipped through our fingers,” he recalled.

The die-hard Chelsea fan could not get a wink of sleep throughout the night. The picture of the defeat became one of the worst nightmares he ever encountered.

“I went through a severe emotional disturbance, but I later tried to calm myself and not let the feelings put me down completely.”

“I felt that way because football means the world to me. It’s the second best thing to me aside from family,” he added.

But Raphael is one among the billions of football (or soccer) fans, who turned the game to the most loved and followed sport in the world. Its global appeal extends beyond attracting the interest of fans around the world: from sponsorship to broadcasting, from club ownership to the origin of its main stars, the game’s reach is universal.

A combined number of over three billion viewers – more than half of the global population aged four and over – tuned in to the 2018 World Cup in Russia, according to FIFA, the world football governing body. Generally, there are about five billion football fans around the world with Latin America, the Middle East and Africa representing the largest fan bases.

The global in-home TV audience watching at least one minute of coverage totalled over three billion, while a further estimated three million people caught the action on digital platforms, in public viewing areas or in bars and restaurants, boosting the total audience by 9.5 per cent.

Jude Nnanna has been an Arsenal fan since 2007. He supported the English football club after watching one of the club’s game that impressed him. He thought the team would maintain the streak of the performance. Unfortunately, everything fell apart a couple of years later.

Being a football fan has come with a lot of heavy price for Jude. Even though he still supports Arsenal, he could not remember how many times he was driven to tears after his team lost or drew crunch games.

“I remember this particular game. It was against Newcastle when they came from four goals down to draw with Arsenal. It was the worst moment as a football fan,” Jude reminisced.

At the viewing center, he was surrounded by other clubs’ supporters who threw subtle and heavy mouth jabs at him that deeply hurt and drove him to the point of tears. He later got his mind off it forcefully and went out of the viewing center.

“Ever since then,” Jude said, “when my team is about to play a tough team, I try to confidently compose myself in front of others but deep inside there is always an influx of adrenaline and curiosity as to how the game is gonna end.”

The emotional intensity, unending arguments, and the banters coming from the fans sometimes causes fights and even deaths.

Such is what claimed the life of a 28-year-old Saifullahi Abdullahi from Danja Local Government Area of Katsina State. Abdullah was reported to have engaged in an argument with an 18-year-old Idris, over which was a better team between two European Football Clubs, Chelsea and Barcelona.

The argument morphed into a fight which eventually claimed the life of Saifullahi Abdullah.

Football club fans who attack and fight other football club counterparts are under the control of mental influence, according Dr Richard Shuster, a clinical psychologist and host of The Daily Helping podcast, a show that focuses on self-development.

“When your team wins or is playing well, your brain starts releasing the neurotransmitter dopamine, which is directly involved in regulating the brain’s reward and pleasure centers,” a research by Dr. Shuster revealed.

“Conversely, when your team performs poorly or loses, your brain produces cortisol, a hormone made in your adrenal glands that your body releases when you’re under stress.

“Worse, our brains may produce less serotonin, which can lead to increased anger and depression,” Shuster added.

Since Ibrahim Oyebisi was 10, he would always follow his elder brother to the viewing center to watch football games. He did not know the price that comes with it until the club he supported lost a final match. That day, Oyebisi cried profusely.

From there, Oyebisi became so passionate about watching and following football games. He derives enormous pleasure in it, hence, he would try to save money for the next match in order not to miss it, even if that cost him his meals

“Many times, I would be broke, but as a student, I still used to collect money for food from my parents. So, I sacrifice the money for food just to make sure I watch the game.”

‘Football is a game of wins and loses’

Adamu Mubarak nurtures an undying support for FC Barcelona. His love for the Catalan football club cannot be overemphasized. Hence, whenever the club loses, Mubarak feels as if part of him crashes down from his body.

But when the club wins, like many other football clubs, he would sometimes give out money to celebrate the win.

“When FC Barcelona staged one of the greatest UCL comebacks against PSG, I was highly ecstatic and celebrated so much,” Mubarak said. “It was one of the happiest moments for me ever since I supported Barcelona.”

However, he broke down in tears when Bayern Munich thrashed FC Barcelona 8-2 in the quarter-final of the UEFA Champions League in 2020.

“I feel like I should stop watching football after the humiliation, but I could not. I was angry, heartbroken and in fact, I hardly came out of the house for the fear of being mocked by my friends.”

Such is the driving power of football. As team supporters usually have moments they always relish, there are equally depressing ones that shatter their hearts.

“You see, it isn’t interesting if you aren’t losing,” he said. “Football is a game of wins and losses, and it’s interesting.”

‘I am still alive’, Kanye West says as endorsement losses cost him $2bn in one day