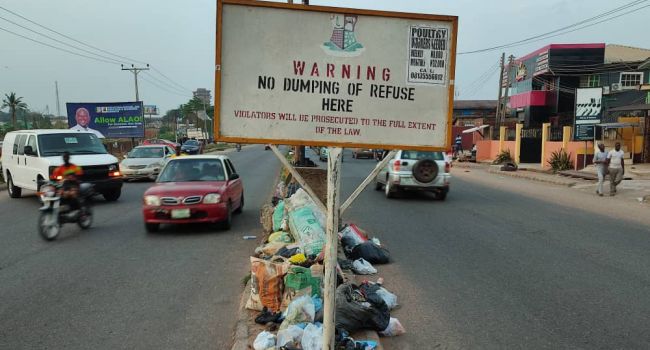 The rural Arikuyeri community in the Lagelu area of Oyo State was thrown into communal mourning around November, 2020, following a cholera outbreak that killed no less than 10 people. “It was like a plague. People were just dropping dead,” Mrs Tiamiyu, a freelance health worker in the community, recounted to this reporter.

Those killed included a chief, popularly known as “Araba”, and a youth leader, among others. Scores of residents were hospitalized.

The World Health Organisation (WHO) defines Cholera as “an acute diarrhoeal infection caused by ingestion of food or water contaminated with the bacterium Vibrio cholerae.” An estimated 2.9 million cases and 95,000 deaths occur each year around the world. The infection is often mild or without symptoms, but can be severe. The symptoms usually include watery diarrhea, vomiting, and leg cramps, while some do not show symptoms at all. In people with symptoms, rapid loss of body fluids leads to dehydration and shock, which without treatment, may lead to death within hours.

According to the Centre for Disease Control and Prevention (CDCP) the cholera bacterium is usually found in water or in foods that have been contaminated by faeces from a person infected with cholera bacteria. “Cholera is most likely to occur and spread in places with inadequate water treatment, poor sanitation, and inadequate hygiene.”

Ms. Mistura was one of those who survived the infection in Arikuyeri, literally translated to “evading death”. She confessed to being carefree with her hygiene and unbothered with sanitation, until she was infected. “We did not have a toilet then, we used to throw shot-put,” she recalled. Shot-put throwing is a form of open defecation that involves rapping feces in nylon and flinging it into a bush, ditch or canal.

Recounting the incident to Ripples Nigeria, another resident, Abosede Alapa stated that the community reeked of environmental pollution due largely to the practice of open defecation by many of the residents, as well as the obnoxious odor from a medium scale poultry operating in the community. The poultry poses health risks to the community. An expert report on the setbacks of poultry farms from other buildings suggests thus: “For residential buildings other than poultry farms the setback must not be less than 500 feet; for public places such as schools, churches or mosques, it must not be less than 1,500 feet; for public roadways, it is 150 feet; and for streams, it is, at least, 100 feet.”

The poultry in Arikuyeri community

The report added that “any poultry farm too close to residential areas, unless with superb waste and litter management, will put its neighbours at serious risk of disease transmission and possible epidemics. Faeces of chickens and turkeys are found to contain pigeon antigens and, according to research, when the antigens get to human’s lungs, they may lodge there and start producing a variety of reactions.”

Mrs Tiamiyu stated that the outbreak had altered the attitude of residents. “Many houses quickly dug pit latrines. There is also hardly a house without at least a well,” she said. This reporter observed that a few houses have boreholes, while others have wells. Access to water has increased in Arikuyeri since the outbreak.

In Nigeria, cholera is an endemic disease that occurs annually, especially during the rainy season. The Nigeria Centre for Disease Control (NCDC) in 2021, recorded no fewer than 3,604 deaths and 111,062 cases of cholera acros 33 states in the country.

The people of Arikuyeri community did not have a change in attitude towards hygiene and sanitation until cholera struck and took their loved ones or neighbors. Many other communities in Oyo state are threading the same path of poor hygiene, open defecation, and unhealthy waste disposal. Such practices, according to public health specialists, poses a threat of another outbreak in the state.

Ripples Nigeria visited the Isunwin, Iyalamu, Sakutu communities in the Atiba local government area, to assess Water, Sanitation and Hygiene of the people. It was observed that the community is littered with numerous unapproved dumpsites which the people also use for open defecation. The Isunwin river, especially, along Sakutu-Sabo road is a destination for open defecators in these communities. This poses health hazards to the residents. Experts say cholera can spread rapidly in areas with inadequate treatment of sewage and drinking water.

Isinwin is a destination for open defecators in Sakutu, Isinwin

While rural communities and urban suburbs reek of environmental pollution, major roads and highways in the state are not exempted from the menace, exposing the culpability of the government. From Challenge to Dugbe, Mokola, through to Bodija, and other areas in the state’s capital, roads are adorned with heaps of refuse. Residents and shop owners mark certain sections of the road as dumpsites, while they remain there for days, sometimes weeks before they are collected by waste trucks.

Mr. Lawrence, who sells electrical appliances along the Ojo-Iwo road axis, hoped that the trucks would be more frequent in evacuating the wastes. “It has always been like this for a long time, I only hope that the trucks will come more often to pack the refuse.”

The Nigeria Meteorological Agency (NiMet) predicted rainfalls in the Southern states including Oyo, between April and May. The heaps are often washed into sewers and streams which serve as sources for washing to residents.

A public health expert, Sogo Adeleye warns that common practice of open defecation and improper waste disposal may cause an outbreak of cholera and other water-borne diseases.

“These are first hand cases of water borne diseases, because these wastes would contaminate the water and children are the ones mostly hit by the devastating effects of these practices.

“One of the health implications of open defecation is that it promotes the spread of diseases that occur by fecal-oral transmission. There are certain diseases that may occur when the contact with the faeces eventually gets to the mouth and some of these contacts might not be direct; it might be by flies that perch on these faeces and eventually spread to people. These diseases include diarrhea, cholera, typhoid fever; it could also include worm infestation. Diarrhea is one of the leading causes of death among children.,” he said.

The report was sponsored by I-79 Media Consults under the ‘Rewriting the Narratives of Environmental Crimes in Nigeria’ project which is supported by the Environmental Reporting Collective (ERC).