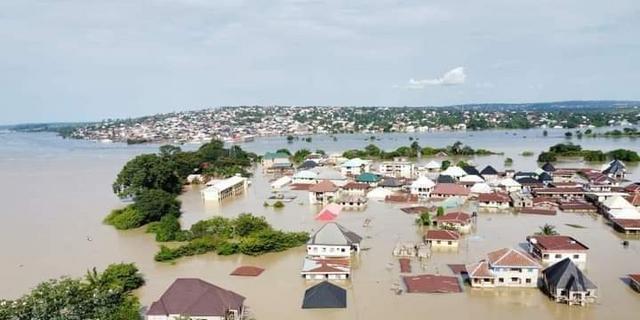 Finding It Hard To Fed Themselves

As floods continue to take over lives and properties in Nigeria, displaced victims are struggling with the economic effect of survival. Kehinde Ogunyale reports

When Lawrence Office, 37, woke up on October 15, 2022, all he saw was flowing water around his community’s drainages. By the evening, the water had moved from the drainage into the house where he lived and by the next morning, almost half of his house was sunk under floodwater.

Office was left with no other option than to move his wife and three children out of the house, but he stayed back to save some household properties from getting destroyed. But, there was, however, little he could do.

“I waited to spend a night but the next day I could not sleep there. I returned to buy wood and bring a carpenter to construct a higher surface where I could place some of my house appliances because the water level had increased beyond where it was,” Office narrated.

The flooding forced Office and his family to live with his married friend who has two children.

“We are like nine living in one house. It is more like the survival arrangement,” he lamented.

Office lives in a small community in Yenagoa, the capital of Bayelsa State. About 300 communities in the state are facing the catastrophic effect of flooding in Nigeria.

The Bayelsa state government said that about 700,000 people have been displaced in five out of eight local government areas submerged by water.

For Office, nothing could be more depressing than living as a displaced person outside his house, thinking of how to survive everyday with minimal resources. “The fact that flood is in the area and you can not go to places you need to go or do things that you need to do worries us even mentally,” he said.

According to the National Emergency Management Agency the flood has affected over 2.5 million people in the country and killed over 600 persons. The agency also estimates that over 1.3 million people have been displaced, 2,407 persons injured, 108,392 hectares of land destroyed and 82,053 houses completely damaged.

Office’s family, who are now living in his friend’s mini flat, find feeding as a daily challenge. “We skip some meals now, instead of eating three times in a day, we eat like one or two times. Things are really expensive now,” he said.

The flood in Bayelsa has triggered economic imbalance as prices of goods, foodstuffs and transportation skyrocket daily. Office said the flood had divided the two major roads that connect to the state making it difficult for marketers to transport products.

“The east-west road to Delta and Rivers states has been cut away and flooded. Food stuff like beans and rice are expensive. A custard cup of rice which was N2,500 is now N6,000. The smallest of all onions is sold for N120 including biscuits and other snacks we can get for the children,” he said.

Pleasant Godswill, another victim who works as a logistic agent, said she has stopped going to her work place for weeks since the flooding started.

Goodwill added that the disaster had forced her mother and younger sibling to live with her lamenting that “this alone has doubled my responsibility and it has not been easy.”

Precious Ayah, 33, said her first encounter with the flood started on a rainy day on October 10. “I had already been hearing about it from other people and how they were being evacuated. But I had not experienced it, not until one day when it rained and the water got to my ankle level.

“It did not dissipate but instead kept increasing,” she said.

Ayah, who lives in Edepie, Yenagoa, waded through the water to go to work for four days. At this point, the water had moved from her ankle to her thigh.

“By the time the water got to waist level then chest level, we were stuck and our properties had been destroyed. We were lucky enough, I guess, to escape with our lives because of a man that charged a fee to cart us to safety. We are presently in an uncompleted building and a major fear is mosquitoes and snakes,” she narrated.

Ayah has lost a television set, a refrigerator, a mattress, gas cooker, a generator set, household furniture and clothes.

While Office successfully moved some of his household appliances to a higher wooden pavement he constructed, but like Ayah, he is also considering moving out of the community once the flooding recedes.

While authorities are taking steps to provide relief responses for displaced victims, there are concerns that these materials are very limited to helping victims.

“We heard that the government is giving some relief materials but we have not received anything here. We live surrounded by water already so we have mostly mosquitos every night. The help we get is not really concrete, some people live outside, on the bridge inside the canopies,” Office lamented.

Ayah noted that palliative materials are only getting to victims who are in the IDP camps. “We have not gotten anything yet,” she maintained.

For Godswill, the floodwater, which had polluted the environment, is causing transmission of waterborne diseases like cholera, malaria, diarrhea and severe headaches which worsens the headaches of displaced victims.

However, NEMA, tweeted that relif intervention has been delivered to the state across all south south zonal offices. “Considering the devastating impacts of flooding in the state, additional relief materials were approved for delivery to the state. This time around, road transportation had become difficult due to the heavy flooding of the East West Road linking to the state.

“Therefore, assistance of the Nigerian Airforce was obtained in airlifting of relief items from Benin Airport to Port Harcourt Int Airport and subsequent use of helicopters to move the items to the Helipad in Yenagoa, the state capital,” the agency said.

Office, however, lives in expectation to receive these interventions as he struggles to feed his family daily.