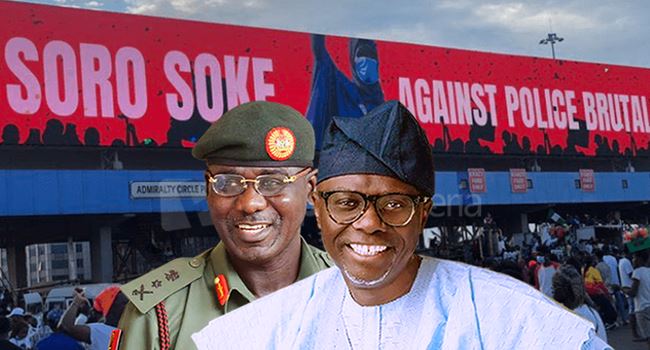 During a night of horror at Lekki Toll Gate, Lagos, many people were shot by soldiers. There were also reported shootings and killings in other parts of the state. Ripples Nigeria’s OLUWAKEMI ADELAGUN pounded the streets of Lagos for several days in search of victims and eye-witnesses to the incidents, She returned with nerve racking terrifying tales.

Many young Nigerians had taken to the streets in protests tagged #EndSARS to speak out against police brutality, harassments and extra-judicial killings in many parts of the country by police and other security forces. These peaceful protests had gone on for many days. But on Tuesday, October 20, around 8pm, the Nigerian military opened fire on unarmed #EndSARS protesters at the Lekki toll gate. In other parts of the state there was a looting spree as police and hoodlums confronted each other in battles of death.

A popular disc jockey, DJ Switch who streamed the incident live claimed the Lekki shooting led to the death of at least fifteen protesters. Similarly, Amnesty International, a rights group, other eyewitnesses and protesters also claimed that many #EndSARS protesters were killed and injured.

One supposed victim also alleged that the soldiers prevented them from receiving treatment when the ambulance came, but later allowed them while they (soldiers) took the corpses away to cover up their act.

The #EndSARS protest was a campaign against the brutality and extrajudicial killings by the Special Anti-Robbery Squad (SARS), a police unit. The nationwide protests which had been holding for more than two weeks sought the end of the unit and a reform of the Nigeria Police Force.

The Nigerian Army had initially denied involvement in the incident, while the Lagos State Governor, Babajide Sanwo-Olu said he had no power to invite the military to the state. However, subsequent revelations put a lie to some of these submissions. The army, however, continues to maintain that soldiers did not use live bullets against the protesters, and that no one was killed.

After the shootings, and pandemonium that followed, many of the protesters scattered in different directions seeking safe haven. Lifepoint Church, aka Elevation youth auditorium in Lekki, received many of the distressed protesters in the late hours of that Black Tuesday.

The Lagos and Federal governments have left many questions unanswered as to the actual events of that day; who shot at the peaceful protesters? Where is the CCTV footage recovered at the Lekki Tollgate? It is hoped that the Judicial Panel of Inquiry and Restitution to investigate cases of police brutality, set up by the Lagos State government, will provide some answers to the events of that day.

A credible source at the Redington hospital in Lekki who was on duty on that Black Tuesday said they (endSARS protesters) came around 2am on bikes. The source noted that many had gunshot wounds, others had bruises. He said after the Lagos State governor came to visit the victims, he directed that they be taken to the general hospital in Ikeja.

Corroborating the claim, a source at the Lifecare Vedic Hospital in Lekki confirmed to Ripple Nigeria that “people plenty”, with various injuries.

He said he did not know the “accurate number” of the victims because some of them came in with the ambulance and were taken to the emergency unit. He said one of the gunshot victims identified as Jerry used his phone to call his relatives.

Two colleagues, who had gone for the protest on that Tuesday, Peter and Adekunle (surnames withheld) told Ripples Nigeria that the organisers at the protest ground assured them of safety and advised that they (protesters) sit and wave the Nigerian flag.

However, he (Peter) left in the evening when he started hearing gunshots. He said he left his colleague Adekunle at the protest ground. He mentioned that he slept at his office staff lodge in the area till Thursday because he could not get a bus to his residence due to the curfew.

“They (soldiers) parked at Sandfill bus-stop, immediately they came. We were at the protest ground, people were not that much like before, we were at one side of the Tollgate, the side toward Lekki. We just noticed (that) some people ran to the other side of the Tollgate, we were like five of us that were there, I saw my colleague going to where people were running from and rushed and followed him that even if you will go and see what was happening don’t stay in the front. And we never heard anything, some people said that some military men were there.

“Immediately I got to the barricaded boundary, it was the first gunshot and the second one I heard before I ran. I saw them (soldiers) when they started shooting, but I don’t know if it was up or direct. They just stopped at the bus stop, it was that same bus-stop that they started shooting from, they never gave us any notice.”

Adekunle said he left late in the night when someone who stood beside him was shot. He noted that he and some others tried to help the guy but he did not want to be a target, so he quickly left and ran to his office branch in Lekki. He confirmed that the soldiers in about five vans shot from the Sandfill bus-stop before coming towards them at the tollgate. He also said that “few minutes after they started shooting, the traffic light went off.” 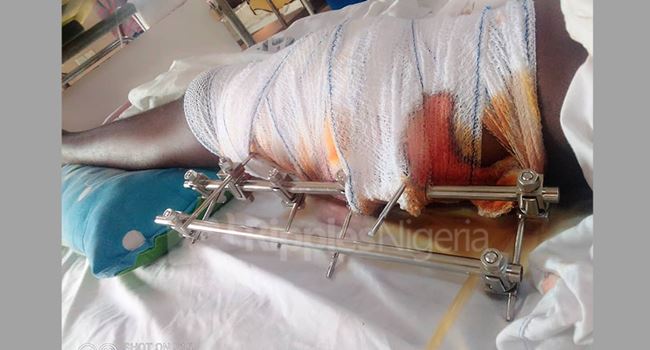 Mrs Abiola Yusuf, a trader in Okokomaiko market, started her day with the aim of making sales, unknown to her she would receive news that her first child, Bode was shot.

Bode was shot on his way from work around Ajangbadi Police Station. The teenage boy is an apprentice in an electronic workshop who was returning from work after his mother called him to get home early for safety reasons.

According to her, she had earlier called him when she heard gunshots to warn him to “refrain from taking the main road but to ply the inners roads.”

She said her son was about to take the road leading to their residence when he got shot on his leg (upper region).

“I wanted to get angry with him, but he was not the only one hit, market women were hit too. And since then, we have been running halter skelter.”

Recounting her ordeal, she said her son who was carried on a bike and supported by an elder brother in the neighbourhood was rejected at three private hospitals. He was however, given first aid treatment at Igando General hospital before he was referred to the Lagos State University Teaching Hospital (LASUTH).

“The bikeman initially refused to take him, but I had to beg him on my knees in tears,…I took many buses to meet up with them, sometimes, I will trek from bus-top to bus-stop till I got to Ikeja on Tuesday. It was very terrible that day.”

She mentioned that the incident happened around 12 noon and they got to LASUTH in the evening and “he was in serious pain crying while on the bike”. She also mentioned that he was treated for free except that she bought the iron attached to the wounded part.

Arrow not gunshot in Fagba

In Ifako-Ijaiye area of Lagos, Fagba Junction precisely, there was looting and violence under the guise of #EndSARS protest. Adebayo Salawu, a dry cleaner had gone to deliver some clothes and was on his way to his shop when an arrow hit his chest.

Shot in the head on Island

When the protests in many parts of Lagos turned violent, Ayomide Adeniyi was one the of the victims of a gunshot in Lagos Island on Wednesday, October 21, 2020. 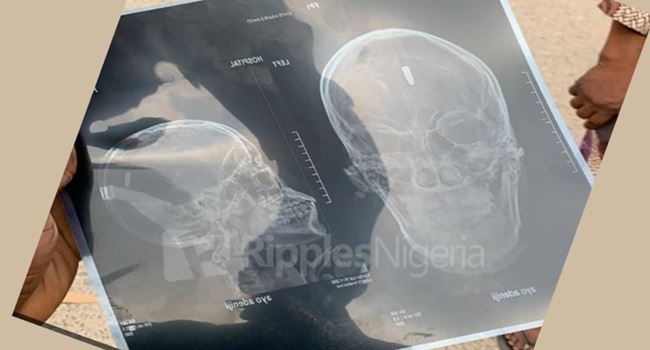 Mr Adeniyi who was barely recuperating was shot in the head. His mother who spoke to Ripples Nigeria claimed that the “DCO (of Ebute Ero police station) shot him and people can testify, you can even confirm it if you make your findings.”

Hit by a stray bullet in Ajah

Moses (Surname withheld) claimed he was shot on his arm on Wednesday, October 21. When our correspondent reached him, he was travelling out of Lagos to his home state, He said he needed to treat the gunshot wound on his arm the traditional way.

“I went to my brother’s place in Adesanya, I was around a place that they use to fry Akara. That was when some boys started throwing stones into the …police station, then they started shooting.”

He said he was hit by a bullet, but could not say who fired the shot, as he had to take to his heels to save his life. 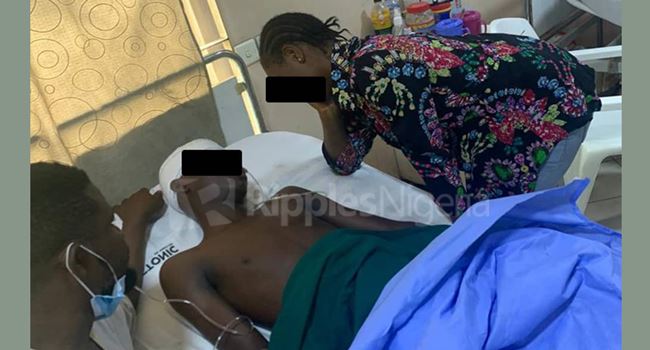 John Harrison, a victim of the Lekki shootings narrates his near death experience: “We went to share food with my madam, after sharing the foods, my friends and I, four of us, were in the area, just across Oriental Hotel, around 7 pm and 8 pm. We saw cars with siren coming. As the cars stopped immediately, they opened fire, we thought they were shooting in the air, maybe it’s rubber bullet, we started to run, then I saw like five people on the ground in front of me. Turning back, there were bloodstains on my clothes, my friend too had fallen”.

Mr Harrison said he wanted to carry his friend but he could not because he (his friend) was heavy. He said some of the military personnel came down from their Hilux vehicle and starting beating some that were not hit.

He also noted that some people ran to the back of Oriental hotel thinking there was an escape route. And some jumped into the water.

“They held me on the ground and started hitting me with their riffle on my head and ribs. At the end of the day, they were still not satisfied, they wanted to stab me with their knife on the chest, I tried to block it with my hands, but got stabbed in my hands and ribs. I started losing blood and fainted, they thought I was dead, so they left,” he claimed.

“I didn’t know that there was another one at the back passing, then I felt a sensation in my leg and shaked, that one saw me and stabbed me again and left.”

The victim who stated that he woke up at Greenland Hospital, Chevron, mentioned that the “army packed the dead ones in their trucks and the ambulance packed those that were still shaking.”