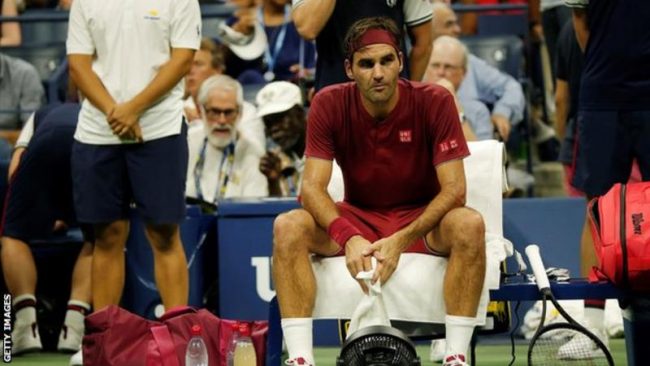 Roger Federer has blamed the atmospheric condition at Flushing Meadows, New York, after he faced a shock defeat to John Millman at the ongoing US Open.

The 37-year-old Swiss lost for the first time in 41 matches at the US Open against a player ranked outside the top 50 in the ATP.

“It was very hot and one of those nights where I felt I couldn’t get air. There was no circulation at all,” he said.

“I just struggled in the conditions and it was one of the first times it has happened to me.

“You just keep sweating and lose energy. At some point I was just happy the match was over,” added Federer who was bidding to clinch a sixth US Open title and a record-extending 21st Grand Slam.

Meanwhile, 29-year-old Millman is the only unseeded player left in the last eight of the men’s singles category.

“I’m probably in a little bit of disbelief,” said Millman.

“I have so much respect for Roger and everything he’s done for the game. He’s been a hero of mine.”

He will take on Novak Djokovic in the quarterfinals.

‘I didn’t imagine it’ – Messi surprised that Ronaldo left Madrid