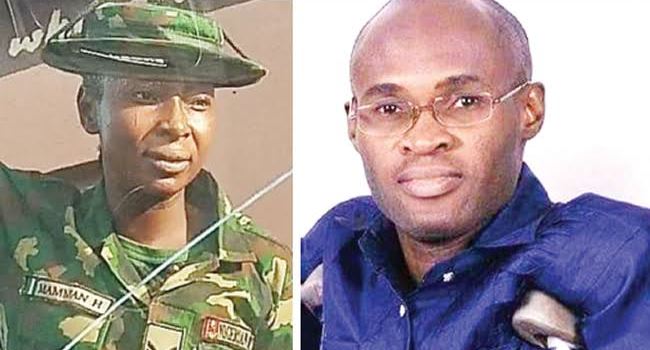 A female soldier identified simply as Mamman H, attached to the Letmuck Barracks in Ibadan, Oyo State, has been caught on video beating up a physically challenged man, Adedeji Abolade, for allegedly scolding her four-year-old son.

The incident reportedly happened on Thursday, December 3, at the Mokola area of Ibadan, where the female soldier was caught in the video assaulting Abolade who was on crutches due to his disability.

According to eyewitnesses, Abolade had scolded the soldier’s child for attempting to cross the road all by himself on Wednesday, December 2, but the following day, the woman came with some others, waylaid Abolade and beat him up for “having the effrontery to scold her precious son.”

Abolade who later spoke to journalists on the assault he suffered at the hands of the female soldier, said he was taking his children to school when, suddenly, the boy jumped on the expressway and he had to stop his vehicle and scold him for it.

“On Wednesday when I was taking my children to school, a child jumped on the expressway to cross the road. Luckily, I was not speeding, so I came out and asked around who the mother of the boy was.

Read also: Soldiers arrest female bandit after video on her phone revealed her dancing with AK-47

“No one answered until one guy said he knew his mother, but we didn’t see her. I warned the boy not to cross the road alone again,” Abolade stated.

“This morning (Thursday) at around 7.30am, when I was taking my children to school, the female soldier and five other people waylaid my vehicle.

“When I got to the area, she dragged me out of the car and they started hitting me. As they were beating me, I was shouting for help and when it got to a stage, people took me from her and I was able to take my children to school.

“On my way back, she was now fully kitted in her uniform. Immediately she sighted me, she started beating me again. I told my daughter to start recording; the other people wanted to join in beating me, but when they saw that they were being recorded, they dragged her from there.

“I went to the Letmuck Barracks where she is attached to and the person I met at the gate identified her.

“But when we got to the military police unit inside the barracks, one Balogun made me walk several kilometres in the name of looking for the soldier and later claimed that she was an unknown soldier.”