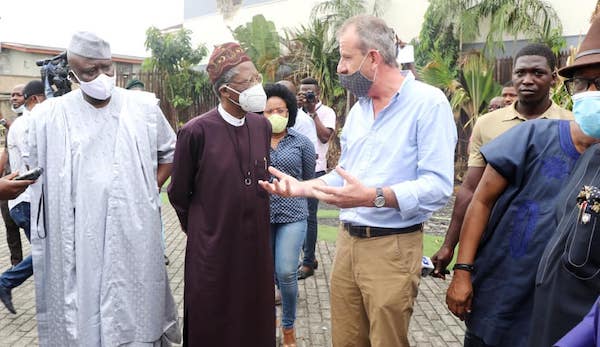 The Minister of Information and Culture, Lai Mohammed, said on Saturday destruction of The Nation Newspaper and Television Continental (TVC) headquarters in Lagos was an attack on democracy and freedom of the press.

Mohammed stated this when he led a Federal Government’s delegation including heads of agencies in the ministry to commiserate with the management and staff of the two media firms.

The Nation Newspaper and TVC buildings were looted and burnt by hoodlums during the unrest that trailed the #EndSARS protest last week.

At the Nation Newspaper head office in Mushin area of the state, the minister said the attack was premeditated to silence the press in the defence of democracy.

He said: “From our tour and your explanation, it is clear that this attack was not just premeditated, it is targeted on free press and democracy because there cannot be viral and robust democracy without a free media.

“While we are saddened by the extensive damage done, we have cause to give thanks to God that no life was lost.

“From the gunshots on the wall and windows, there would have been greater casualties.

“However, the fact that within a few days you are able to return to the stands is a big blow to the naysayers who thought they could put out a light of press freedom.”

Mohammed said the current administration has high regard for freedom of press and would put policies in place to ensure the media work uninhibited.

He stressed that the intention of the perpetrators was to silence the media.

Earlier, the Chairman of the company’s Board of Directors, Mr. Yomi Edun, said the attack reflected the hazards associated with the media profession.

He said: “Journalists and media people suffer all kinds of indignity in the course of doing their jobs.

“They are beaten, brutalized, tortured incarcerated, and even killed in the course of discharging their duties

“Last week, these premises where we produce and print our titles came under vicious and directed attack.

“They invaded the premises with all manner of weapons, including guns, and set it ablaze and many properties were carted away.”

He, however, vowed that the television house would continue to persevere in the face of adversity.

Hanlon, who thanked the delegation for the visit, said the media house mobilised all resources to come back on air.