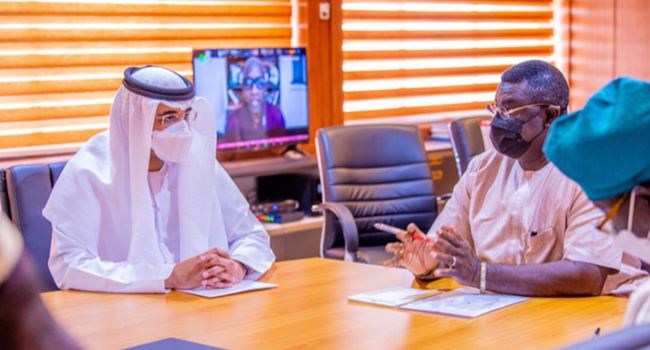 The Federal Government has called for robust collaboration with the United Arab Emirates (UAE) in strengthening existing bilateral relations between the two countries.

Minister of State, Finance, Budget, and National Planning, Prince Clement Agba, disclosed this in a statement by the ministry’s spokesman, Mrs Victoria Agba-Attah, in Abuja on Sunday, February 14.

He called for robust collaboration between Nigeria’s Ministry of Finance, Budget, and National Planning and its relevant counterparts in the United Arab Emirates (UAE).

Agba made the call in Abuja when he received the UAE Ambassador to Nigeria, Dr Fahad AITaffag to extend an invitation to participate in his country’s trade and promotional campaign 2021 aimed at improving trade and bilateral relations with other countries.

The minister appreciated the enormous work UAE had been doing with ministries and states in the country.

He said that their activities had remained unreported due to lack of collaboration with the Ministry, which was saddled with coordinating bilateral relations and agreements.

Agba said that there was no report of UAE’s activities on the Development Assistance Database (DAD) platform.

“When we have the data we can properly brief the Federal Executive Council (FEC) on your activities in the country.

“I am optimistic that this visit will be a starting point for robust bilateral relations between the Ministry and the Embassy,” he said.

The minister said that at the Dubai Expo 2021, he would liaise with his colleague, the Minister of Industry, Trade, and Investment to work out modalities on how Nigeria could come in.

He expressed his readiness to work with the Embassy in making quotes/comments on bilateral relations of both countries as part of media promotion materials for the February campaign.

AITaffag said the Expo, which is scheduled for later in November 2021, would be part of the activities to mark their Independence Day celebrations.