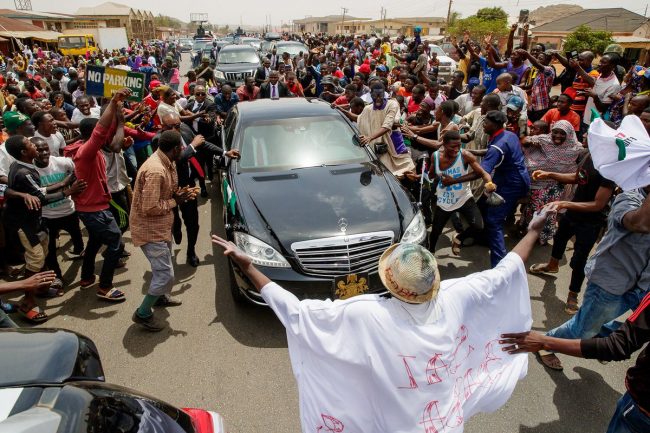 President Muhammadu Buhari Thursday, while on a one-day working visit to Plateau State, pledged the federal government’s support to the peace building initiative of the state government, and expressed determination to replicate such effort across the country at a time when violent conflicts continued to pose serious threat to peace and unity.

The visit is in continuation of the president’s tour of troubled states, highlighted by an upsurge in clashes between herders and farming communities.

He kicked off the tour on Tuesday in Taraba Stateand is scheduled to also visit Benue and Zamfara states.

The president landed at the Heipang Airport in Jos at about 12:05 p.m. and was received by Governor Simon Lalong, his Nasarawa State counterpart, Tanko Almakura, and a crowd of political office holders from across the political divide in the state.

Following his arrival, President Buhari commissioned the Mararaban Jamaa road renamed after him.

Speaking at a town hall meeting, Buhari who also launched the Plateau State Roadmap to Peace, congratulated the Governor for uniting the people of the state.

“I wish to encourage your Excellency to continue with the good work you are doing, and I wholeheartedly congratulate you for uniting the people of Plateau State.

“I am indeed quite impressed with gains and successes recorded in the area of conflict management and peace-building, which has returned this state to the path of relative peace.

“Let me express the Federal Government’s commitment to support and assist the Peace Building Agency in its effort to arrest the vicious cycle of violence and lay the foundation for sustainable peace in our country”, he said.

President Buhari also commended Governor Simon Lalong for his achievements in the development of the state, ensuring regular payment of salaries and pensions, strides in the agricultural sector and assured that the Federal Government would continue to work with Plateau State government.

“I am glad that the state government has fully keyed into the All Green Initiative and the Anchor Borrowers’ Scheme of the Federal Government considering the strategic importance of agriculture to our national development.

The President lauded Governor Lalong for continuing with the projects abandoned by previous administrations, noting that this has saved the state from white elephant projects and assured that the federal Government will speed up refunds on Federal works executed by the state.

“I have noted the request for refund of funds expended on the rehabilitation of the Jos-Bukuru-Mararaba Jema’a Road which is a Federal road project and other interventions. Federal Government will expedite action towards the refund of verified claims by the Plateau State Government,” he said.

Buhari also listed some of Federal Government intervention activities such as the construction of the Pankshin-Tapshin-Gambrar-Sara-Kai-Gindiri Road to Metropolitan Construction Company Ltd; Execution of TETFUND Projects; Bail-Out Funds; Paris Club Refunds and N-Power Scheme and assured that the request for dualization and construction of the road from Abuja to Jos will be put into consideration given its economic viability and status as gateway extending to the North East.

Responding to a request by the Governor for the inclusion of more Plateau State indigenes in Federal appointments, President Buhari assured that, “the request will be looked into so as to reflect federal character in line with the Federal Government’s determination to address issues of marginalization in the spread of appointments and other privileges.”

Buhari also reminisced on his time as General Officer Commanding (GOC) of the 3 Armoured Division Jos, recalling that it was from this position that he was summoned to become Head of State in January 1984.

After commissioning some road projects executed by the state government, the president paid a courtesy call on the Gbong Gwom Jos, Dr Jacob Gyang Buba.

Earlier, the Minister of Youth and Sport Development, Solomon Dalung, in an interview with journalists at the airport, called on Buhari to include Plateau among states to be rebuilt from devastation by civil unrest.

“In spite of the relative peace we are currently enjoying in the state, people of Plateau State are still pained by the high level of devastation caused by incessant crisis,” Mr. Dalung, an indigene of the state, said.

“The federal government should not concentrate only on rebuilding states in the north-east that were affected by civil unrest, we are all witnesses that it all started here in Plateau State.”

According to Dariye, a member of the ruling All Progressives Congress (APC), the said road had become a death trap and a haven of armed bandits due to its poor state.

“Many have died on the road,” the senator, who is a former two-term governor of the state, said.

He called on President Buhari to correct the alleged neglect by executing projects in the state.

Sulemain Kwande, the APC member of the House of Representatives for Bassa/Jos North, and his PDP colleague for Pankshin, Kanke/Kanam Federal Constituency, Timothy Golu, PDP, said the president’s visit would allow him see for himself the challenges facing the state.

On his part, the state chairman of the APC, Latep Dabang, said citizens of the state expect the President to address critical issues confronting the state.

Plan to extradite Kashamu to face trial in US suffers setback