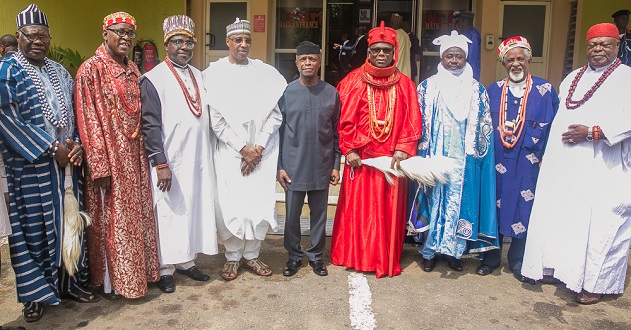 Vice-President Yemi Osinbajo has commended traditional rulers for the role they played in ending hostilities in the Niger Delta, as well as reining in the Indigenous People of Biafra (IPOB).

Speaking on Wednesday at the opening of the 10th National Development Summit of Nigerian Traditional Rulers in Abuja, Osinbajo said monarchs intervened when the corporate existence of the country was under threat.

The vice-president challenged them to take greater responsibility in resolving conflicts.

“I can say without fear of contradiction that the New Vision for the Niger Delta would not have happened without the support of traditional rulers and leaders in the region,” he said.

“We have made it a priority to meet with them and carry them along, and ask for their wisdom and their support in resolving issues with stakeholders and communities. This was also our approach in the wake of secessionist agitation by IPOB in the South-East.

Read also: ‘I swear in the name of God’, I would’ve sacked service chiefs by now— Atiku

“May I therefore most respectfully ask that you take this as a call to you, as royal fathers, as traditional rulers, as elder statesmen, to commit yourselves to deepening your partnership with government, to achieve our shared goal of laying the foundation of peace and security that will guarantee true greatness for Nigeria.

“Traditional rulers are better placed to champion this vision of continuing dialogue and engagement because of the respect you command from the widest possible range of stakeholders and parties.”

Osinbajo added that though security agencies were critical elements in checking criminality and ensuring that perpetrators are brought to justice, traditional rulers are stakeholders.

“You are also repositories of important intelligence that can be useful in detecting suspicious or criminal activity. The partnership between traditional authority and government is therefore crucial,” he said.