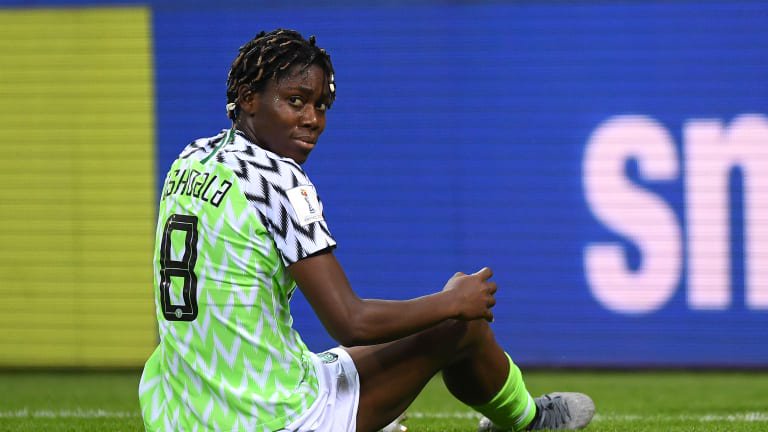 Super Falcons forward, Asisat Oshoala has for the first time publicly reacted to the team’s failure to secure a spot in Tokyo 2020 Olympic Games.

The African champions were stunned by Ivory Coast in the third round of the qualifiers, as the Ivorians played a goalless draw at home and a 1-1 draw at the Agege Stadium in the second leg.

Oshoala, who featured in the games, however blamed the use of inexperienced players in place of her teammates that played at this year’s FIFA Women’s World Cup in France.

Recal that first-team players like Desire Oparanozie, Rita Chikwelu, Halimatu Ayinde and Onome Ebi were left out of the country’s Olympic Qualifying series for administrative reasons.

“In the Olympic Qualifiers, we did our best to qualify but obviously, we didn’t have our best team,” Oshoala told Goal.

“Our best team didn’t play the qualifying games. I was there and we missed a lot of players from the Women’s World Cup who didn’t feature in the Olympic qualifying matches.

“I think that if we are going to be building a team and really wanted to go to the Olympics, the players that we had were not experienced enough.

“There were a lot of young players, maybe they were trying to build the team but it thinks experience counts a lot in games that involve two legs and then it’s a knockout.

“A lot of experienced players were not part of the team and it actually added to the reason why we didn’t qualify.

“We also had a lot of younger players coming into the team and the coach trying to build around them. We were so unlucky not to qualify.”

Oshoala recently hosted the fifth edition of her School Girls Football Clinic tagged #football4girls, which helps girls in Lagos Secondary Schools to achieve their dreams of engaging in football as a career.