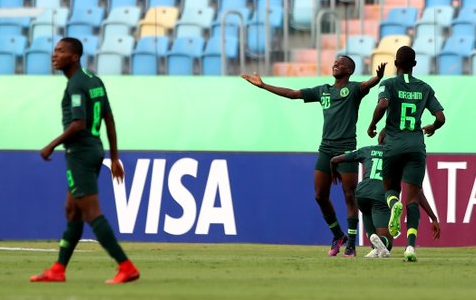 A hat-trick by Ibrahim Sai’d helped Nigeria fight back to beat Ecuador 3-2 in their second Group B game at the ongoing FIFA U-17 World Cup in Brazil.

Having won their opening game against Hungary last weekend, the victory on Tuesday night means Nigeria are through to the second round of the competition.

It was a hard-fought victory against Ecuador at the Estadio Olímpico, Giaonia as Sai’d confounded the opposition with three goals, making a Daniel Jinadu own goal and a converted penalty by Johan Mina not mean much in the end.

The Manu Garba side took the lead in the 7th minute but the South Americans leveled about three minutes later when Jinadu’s back diverted home Mina’s long range effort.

Nigeria dominated the rest of the first half but could not regain their lead. Ecuador then scored a penalty in the 56th minute to be ahead for the first time in the game.

They looked to be coasting home with an important win before Sai’d struck twice in the last five minutes to hand the Eaglets their second win in the competition.

nigeria will face Australia in their last Group B game on Friday.