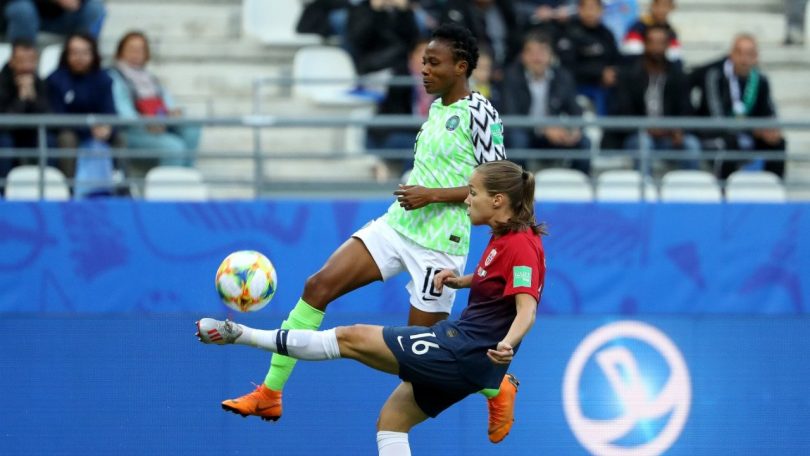 Norway have defeated Nigeria in what could be termed an unbelievable start for the Super Falcons of Nigeria at the ongoing FIFA Women’s World Cup.

Despite a good start by the nine-time African champions, the Norwegians took advantage of the frailty of the Nigerian defence and earned for themselves a commanding lead in the opening half.

The Falcons fell behind in the 17th minute after a defensive error gifted Guro Reiten the opener for the Europeans inside the Stade Auguite Delaune in Reims.

Norway doubled their lead on 34 minutes through Lisa-Marie Karlseng Utland, before an own goal by Osinachi Ohale made it 3-0 before halftime.

The scoreline remained unchanged till the end despite the Falcons putting in more effort to force a comeback, with one spectacular attempt by Asisat Oshoala going wide.

Read Also: Super Eagles held to goalless draw by Zimbabwe in pre-AFCON warm up in Asaba

A major highlight of the second half however is the moment Nigeria lost Faith Michael to injury, as she was even helped off the pitch on a cart.

Meanwhile, this is the second time both teams have met at the global showpiece, with the last encounter being in Sweden 1995, where Nigeria were beaten 8-0 in the group stage by the eventual champions.

The Thomas Dennerby ladies will be hoping to get back unto their feet when they face South Korea in their second group game next Wednesday at Stade des Alpes.

South Korea lost 4-0 to host nation France in the opening game of the tournament on Friday in Paris, and will also be fighting for survival.

As it stands, hosts France are top of the Group A, with a better goal difference than Norway in second spot.

Earlier on Saturday, another Africa’s representatives, Banyana Banyana of South Africa, lost 3-1 to Spain in Group B.