Fight breaks out at Reps hearing on PIB | Ripples Nigeria 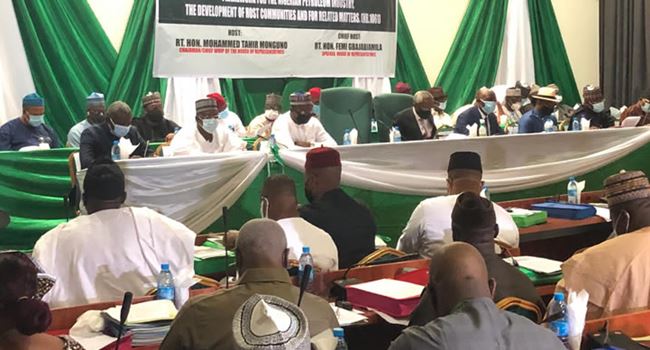 A fight broke out on Thursday at the House of Representatives public hearing on the Petroleum Industry Bill.

Members of host communities engaged in physical combat after a rowdy session broke out while they were making their presentations.

The fight ensued when the Host Communities of Nigeria Producing Oil and Gas was called to the podium to make a presentation.

However, some other groups stood up, leading to a rowdy session.

The lawmakers had to seek the intervention of security operatives as the situation deteriorated and moved beyond control.

Stakeholders of the oil-rich areas under the auspices of the Host Communities of Nigeria Producing Oil and Gas had on Tuesday openly rejected the 2.5 percent proposed for them in the PIB being considered by the joint Senate Committee on Petroleum Resources, (Downstream, Upstream and Gas).

They insisted on 10 percent of the operating expenditure of the oil firms to set up a trust fund.

Related Topics:Petroleum Industry Bill
Up Next