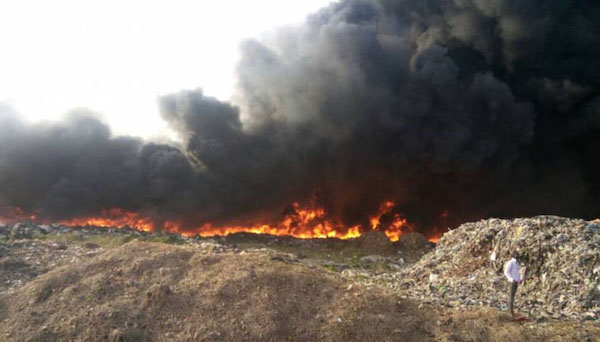 A fire incident was recorded at the Olusosun dumpsite in the Ojota area of Lagos on Monday.

The Director- General of Lagos State Emergency Management Agency (LASEMA), Dr. Femi Oke-Osanyintolu, who confirmed the incident in a statement, said the incident occurred at 6:30 a.m.

He said: “The agency received a distress call and activated response to the Olusosun Dumpsite, Ojota, at 6:40 a.m.

“On arrival at the scene, a small pocket fire was observed and was subsequently, extinguished with the collaboration of Lagos Fire Service.”

“Further investigations revealed that the fire was as a result of organic heat generation within the body of waste,that eventually culminated into gaseous smoke.

“There has been physical manipulation of the area to uncover any brewing fire-point and surroundings that have been heavily soaked/damped with water to forestall re-ignition so soon.”

“The situation was later brought under control by the rescue team.”

The dumpsite was shut down in 2018 by former governor Akinwunmi Ambode following a fire outbreak at the facility.