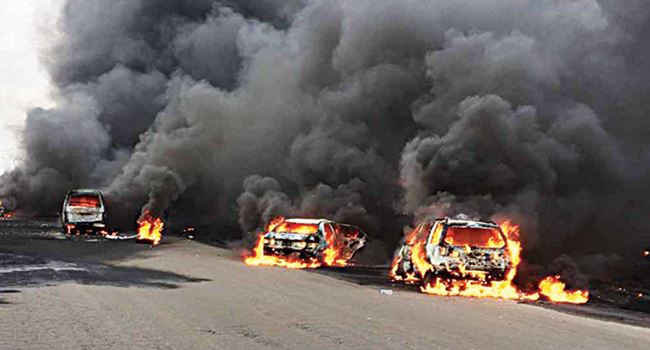 Pandemonium loomed on Saturday when fire ensued at a mechanic village at Oregun area of Lagos and destroyed more than 20 vehicles.

The incident which threw a lot of people in agony though claimed no life, but recorded loss of several millions of Naira.

An eyewitnesses at the scene, said the cause of the fire could not be ascertained.

A resident of the area, Sola Fagba, said he could not deduce the cause of the inferno but lamented that most of the burnt vehicles at the mechanic village are owned by those who want to dispose them for various economic reasons.

Another eyewitness, Tunde Bamisayo, said that the fire outbreak might have come from an electrical fault in one of the cars, adding that this must have spread to other vehicles parked at the mechanic village.

He, however, advised other mechanic villages to be proactive by always making sure that all the cars in the village were put in order before closing for the day.

All efforts to get in touch with the chairman of the mechanic village as of the time of filing this report proved abortive as newsmen were not allowed to enter the premises.

The Lagos State Emergency Management and police officials were noticed at the scene on rescue mission.

Most of the mechanics at the village, who met the situation when they arrived at their workshops for the day’s job were seen lamenting over the incident.

The Lagos Police Public Relation Officer, DSP Bala Elkana said “police will investigate to unravel the cause of the disaster”.