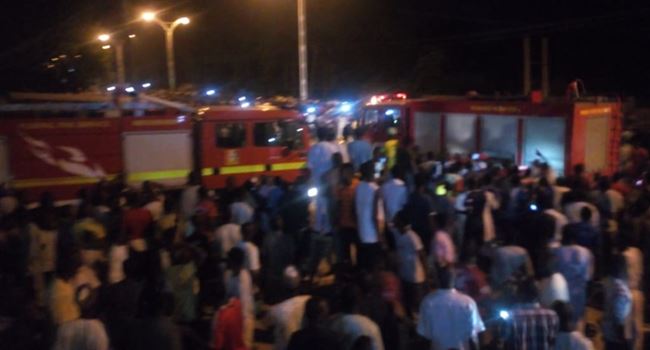 The GSM Market in Maiduguri, Borno State was razed by a fire late on Thursday night.

However, the source of the fire has not been ascertained as the market officials refused to answer questions from journalists on the incident.

The market is the largest GSM outlet in Maiduguri metropolis and is located in the heart of the busy Post Office area of the city.

It comprises of makeshift shops of wooden materials with a very narrow road network.

The fire razed 70 percent of the market, according to eyewitnesses.

Meanwhile, the Borno State Governor, Prof. Babagana Umara Zulum, has directed his Chief of Staff alongside five commissioners to visit the market and assess the level of damage for immediate intervention from the government.

The Special Adviser to the governor on Public Relation and Strategy, Mr. Isa Gusau, said on Friday the governor gave the directives from Saudi Arabia.

He said: “The Borno State Governor, Prof. Babagana Umara Zulum, has from Saudi Arabia, directed his Chief of Staff, Dr. Babagana Wakil, to assemble commissioners whose ministries relate with Commerce, Home Affairs, Poverty Alleviation, and Jobs Creation to immediately assess the impacts of Thursday night’s fire incident at the GSM market in Maiduguri and report to him today.”

Gusau added that Governor Zulum who is with President Muhammadu Buhari at an investment conference in Saudi Arabia shared the pains of those whose means of livelihoods and assets were torched by the fire.

APC state chairmen say Akpabio’s a ‘clog in the wheel of progress’, tell Buhari to sack him