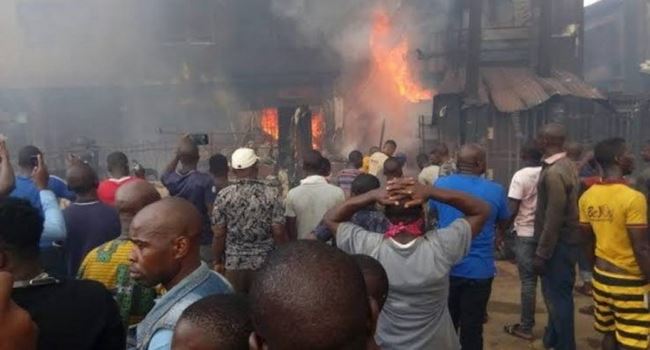 The family house of former President Olusegun Obasanjo in Ita-Eko area of Abeokuta, Ogun State, was razed by fire on Thursday morning.

Eyewitnesses said the inferno was caused by power surge in the building and it threatened to spread to adjoining buildings before it was put out by firemen from the state fire service.

Residents of the area and sympathizers trooped out to assist the domestic workers in the house to put out the fire.

The Director of the Ogun State Fire Service, Fatai Adefala, said the fire only razed a store and not the main building in the former President’s compound.

He told journalists that officials of the agency swiftly responded to distress calls at about 10:00 a.m. and succeeded in putting out the fire.

Although, the cause of the fire has not been ascertained, several food items and properties were destroyed by the inferno.

Eyewitnesses said the fire which affected the rice section of the market, started at about 7:00 a.m. before it was later put out by men of the state fire service in collaboration with the Lagos State Emergency Management Agency (LASEMA) operatives.

The Director-General of LASEMA, Dr. Olufemi Oke-Osanyintolu, who confirmed the incident, said the fire had been curtailed.

“The investigation is ongoing to determine the immediate and remote cause of the inferno in order to prevent future occurrence,” he added.