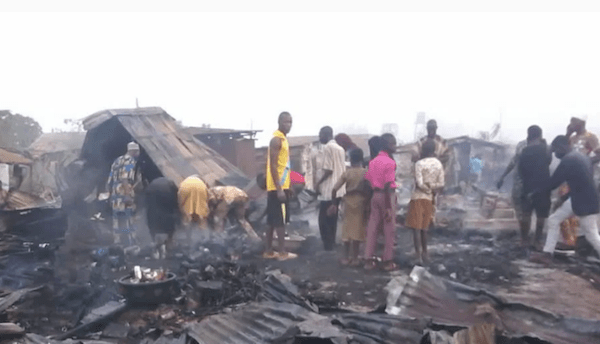 A fire outbreak at a trailer park in Akinyele community in Ibadan, Akinyele Local Government Area of Oyo State, destroyed properties and other articles of trade.

The fire reportedly broke out in the early hours of Wednesday and gutted shops containing many valuables.

The Director of Operations, Oyo State Fire and Safety Services, Mr Adeleke Ismail, who confirmed the incident to newsmen, said:

“Our men attended to the fire incident in record time after being alerted. Our people were called and we responded.

“The fire started from one of the dilapidated shops and spread to other shops. We cannot determine the number of shops that were gutted by fire. Only the containers and structures built with iron or blocks can be counted.

“We cannot assess the affected items. They were dealing with eatable items and free burning materials such as electronics and wears. As you know, it is a place where trailers park and commercial vehicles also load. There are food vendors and there are brothels there.”

“Early this morning, the Chairman, Mr Taoreed Adedigba, received a distress call about a fire incident at the trailer park of Akinyele Local Government.

“The total number of shops that were razed by fire is yet to be known but we learnt that the fire outbreak started around 4am this morning. For now, nobody can ascertain the source of the fire.

“The chairman immediately rushed to the point of the incident to access the situation after contacting all the necessary security personnel, including the fire service, the police and the Amotekun corps.”