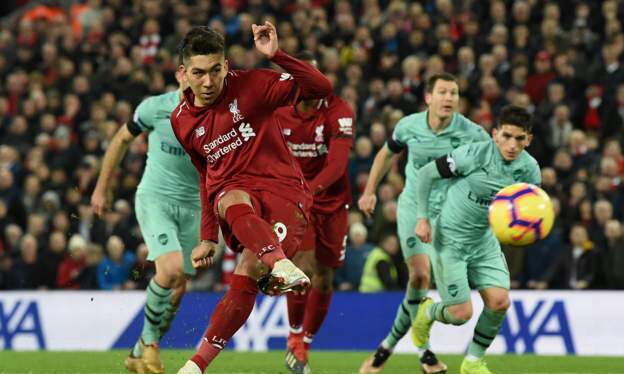 Super Eagles forward, Alex iwobi put up a fine showing for Arsenal as he bagged an assist in their woeful defeat to Liverpool at Anfield of Saturday.

The 22-year old was on from the start to finish of the Premier League encounter and created several chances that were not utilised by his side.

Iwobi fired in a low cross to help Maitland-Niles put the Gunners in the lead on 11 minutes, before two quick goals by Roberto Firmino took the hosts ahead five minutes after.

The League leaders ensured they go nine points clear – after second-placed Spurs were stunned by Wolves earlier on Saturday – as goals from Sadio Mane and Mohamed Salah (penalty) put them 4-1 up at half time.

Firmino added a fifth through a penalty won by Dejan Lovren in the 65th minute to complete his hattrick and put the game out of reach for Arsenal.

Liverpool continue their unbeaten run in the league since the start of the season.

Arsenal manager Unai Emery, speaking after the game: “I think we started well with the first goal and then they had the difference with attacking moments, determination and quality. We couldn’t stop this moment.

“The second half we wanted to little by little impose ourselves to find one goal but another penalty closed the match. [It is a] Bad result. This loss we can use to be better.

“We know we need to defensively get better.

“Liverpool have progressed a lot and it is an example for us. We need to do this progress.”