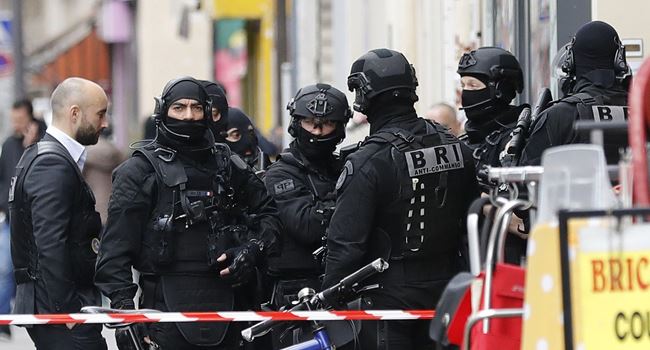 French police have confirmed the arrest of no fewer than five more suspects in connection with the beheading of a French teacher in the Conflans Sainte-Honorine suburb of Paris.

Fresh reports, reveal that five more people were detained on Sunday night, including two parents of pupils at the College du Bois d’Aulne where the victim, Samuel Paty, 47, worked.

One man who said his daughter was in Paty’s class had reportedly recorded a video and posted it to social media calling the teacher a “thug” and calling for other parents to “join forces and say ‘stop, don’t touch our children.'”

Paty who had recently shown students cartoons of the Prophet Mohammed, was beheaded on Friday outside his school.

French police say the assailant, whose identity has not been established, was shot by police as they tried to arrest him and later died of injuries he sustained during a shootout in the Conflans Sainte-Honorine suburb of Paris.

A police official – speaking on the condition of anonymity said the suspect, armed with a knife and an airsoft gun, was shot by police about 600 metres (656 yards) from where the male middle school teacher was beheaded.