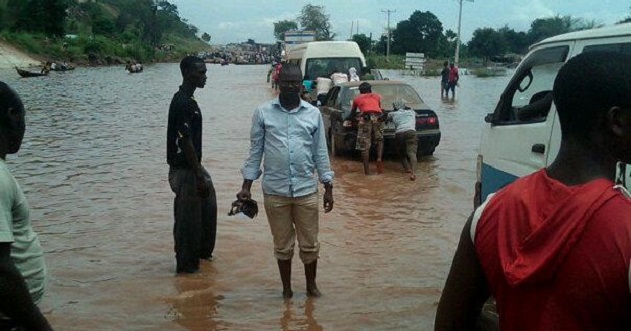 The affected states are Kogi, Niger, Delta and Anambra.

The agency has also placed eight other states on its watch list.

Recall that President Muhammadu Buhari had directed NEMA to declare flooding in Kogi a national disaster after a warning by the Nigeria Hydrological Services Agency that Rivers Benue and Niger had almost reached levels that resulted in flooding in 2012.

The letter, which was signed by Abba Kyari, Chief of Staff to the president, had also directed that the disaster response unit of the military be activated for possible search and rescue of victims.

On Monday, Governor Bello was in Abuja to brief President Buhari on the flood disaster that has so far submerged more than 200 communities in 10 local government areas of the state.

Bello spoke to State House correspondents after the closed-door meeting.

He stated why he came to see the president.

“As usual, I came to brief Mr. President about the situation. I am sure you are all aware of the flood problem that is happening all over the country and Kogi is worst hit being the confluence state, confluence of the two rivers.

“So, we are worst hit and I needed to come and present the report to him myself. Even though I sincerely appreciate Mr. President for deploying relevant agencies like NEMA (National Emergency Management Agency) and all the security agencies to come to our aid”.

He commended the Federal Government for its interventions but said he magnitude of the disaster was such that it required government to supply more relief materials for the victims.

“As I speak to you, NEMA is on their way to Lokoja to access the level of damage and we have received substantial amount of relief materials so far, it is not enough. I need to present the report to him as well and also to tell him about the security of the state and how we are doing.

“We are doing very well and I thank all the security agencies who have been assisting us to make sure we curb insecurity in the state. So these are the issues that I brought to Mr President.’’

Bello said 33 camps have been opened for internally displaced persons (IDPs) as it is the worst hit.

“In 2012, we were worst hit, we are praying that the situation will not exceed that this year. We are normally proactive to sensitize the people and evacuate them to high ground,” he said.

“We have created over 33 camps in Kogi State. As I speak with you, between nine to ten local governments are underwater, you can imagine the pressure on our resources.

“So, we are doing our best in collaboration with federal agencies and security agencies to make sure that we evacuate them to high grounds, IDP camps and provide security to them and relief materials including medicals.