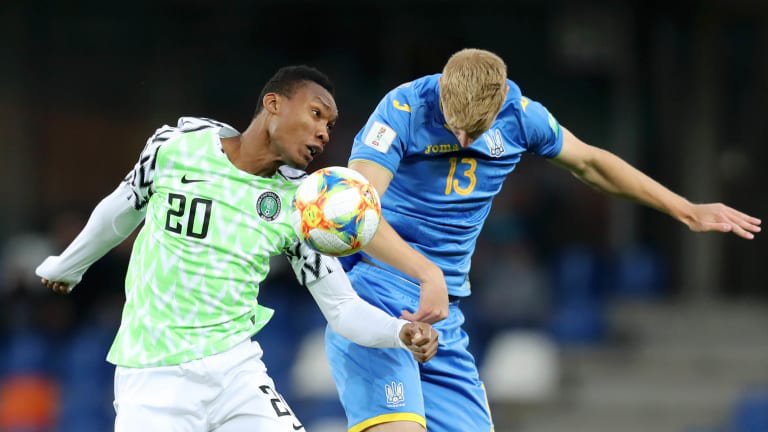 Nigeria’s Flying Eagles have advanced to the knockout stages of the FIFA U-20 World Cup despite drawing with Ukraine to finish third in group D on Thursday night.

In a make or mar clash at the Bielsko Biala Stadium, Nigeria played 1-1 with Ukraine while USA defeated Qatar 1-0 elsewhere.

Nigeria trailed on the half hour mark as a goal by Sikan put Ukraine ahead.

The Eagles got a chance to equalise at the stroke of half time when a penalty was awarded to them, but Tijani Mohammed’s shot was saved by the keeper.

He would later save the day in the 50th minute when he successfully converted another penalty to level both sides.

With the draw, Paul Aigbogun’s lads finished third in Group D with four points, but did not exit the competition as they finished as one of the four best third-placed teams.

CONFIRMED: 🇳🇬 Nigeria advance to Round of 16 as one of the four best third-placed sides. 🇺🇦 Ukraine finish as Group D winners.#U20WC

The young Eagles, who kicked off their campaign in Poland with a sensational 4-0 victory over Qatar, fell 2-0 to USA in their second game, which led them to a crucial final group clash against Ukraine.

Ukraine, with 7 points, finished as group winners, followed by the USA with 6 points in second.