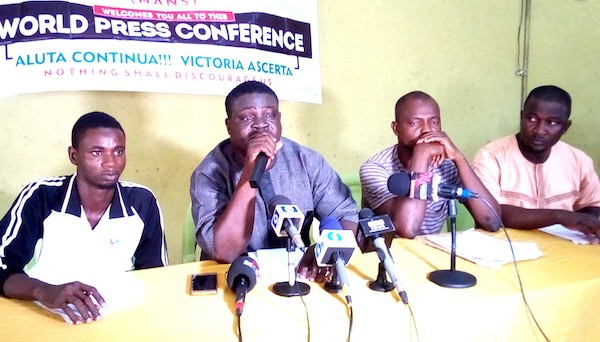 The National Association of Nigerian Students(NANS) Monday advised the men of Economic and Financial Crimes Commission (EFCC) to focus their energy on corrupt politicians in the country instead of harassing innocent students on the pretext of arresting Yahoo boys.

NANS said the alleged relocation of some operatives of the EFCC to campuses of tertiary institutions in Nigeria in search of cybercriminals, had led to unwarranted harassment, intimidation and embarrassment of innocent students. It warned that further harassment would not be tolerated.

Addressing reporters in Abeokuta, the Ogun State capital, on behalf of NANS ahead of the nation’s 59th Independence anniversary, the National Public Relations officer of the students body, Azeez Adeyemi, said it would be more productive if the same energy used by the anti–graft agency in hounding ‘Yahoo Yahoo boys’ could also be channelled towards identifying and arresting of politicians who had allegedly looted the country’s wealth on a mind-boggling scale.

Azeez, who felicitated with President Muhammadu Buhari and Nigerians on Nigeria’s independence, added that the students recognised the sacrifices of the nation’s forbears who made independence a reality and patriots who paid the supreme price in the course of fighting for freedom against oppressors at any level since the creation of the Nigeria state.

He said: “Our attention has been called to the relocation of the officers of the Economic and Financial Crimes Commission to our campus in search of cybercriminals, this we did not stand against but it will be more productive if that same attention can be channeled to our politicians who have looted this country in a larger scale.

“Under the disguise of fighting ‘yahoo boys’ many of our students have been harassed, humiliated and embarrassed for no just reason, this act we will no more accepted going forward from now,” he said.

He also frowned at the Central Bank policy of charging banks’ customers 7% on withdrawals, saying it was targeted at further impoverishing the poor.

“Also, if this policy is allowed to scaled through, it will increase robbery cases as the people will find keeping money at homes as an alternative,” he said.

He, however, lauded the Federal government of Nigeria in its efforts to make the country a self-dependent and self-reliant nation, and advised that similar steps should be taken in the areas of healthcare, recommending that top government functionaries including the president be barred from engaging in foreign medical tourism.

READ ALSO: ‘All is not well,’ Atiku Abubakar speaks on Nigeria at 59

NANS also expressed support for Vice President Yemi Osinbajo against perceived coordinated attacks from within and outside government.

He said: “We, however, applaud the Federal government of Nigeria in its efforts to make Nigeria self dependent and self reliance nation. We appeal that a step should be taken further by ensuring that all our top government functionaries including the President are barred by law from undertaking foreign medical tourism and should be treated here in Nigeria no matter the nature of their ailment so as to improve the standard of our medical facilities in the country.

“Although recently, the Vice President has been faced by some unseen power blocks who tried to test the stance of God in the life of the anointed, although, they met God firmly behind him, But for a face saving for the government, this planned evil acts has been described as false and we want to believe same.

“May use this opportunity to express our loyalty to the Vice President as he is clearly a major standing factor for which many are still respecting this government.

“For his giant strides especially at the times when the President is out of the country, we pass our vote of confidence on his Excellency, Vice President, Prof. Yemi Osinbajo and we remain firm with him against any odd.

“We have received reports from our comrades in many states of the federation hence, the need to give kudus to some Governors.

“In Ogun state, we must appreciate the giant strides of the Governor, Prince Dapo Abiodun in procuring 100 patrol vans and 200 motorcycles for the security of the state with a view of achieving a crime-free state under his watch”.