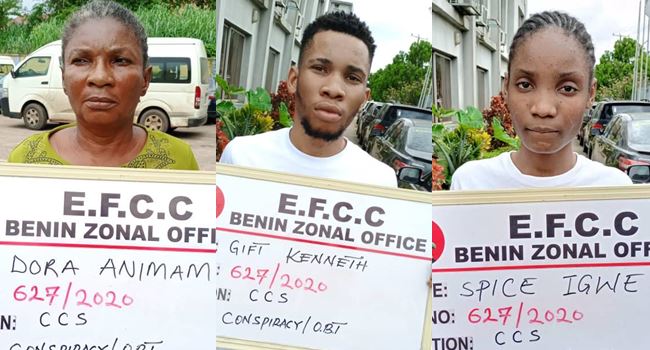 A 22-year-old Computer Science Undergraduate of the University of Port Harcourt, Kenneth Gift, his girlfriend, Dandy Spice and mother, Dorah Aninah have been arrested for suspected internet fraud.

Dele Oyewale, Head, Media and Publicity of the EFCC said in a statement that the arrest of the suspects was sequel to a petition from the US Federal Bureau of investigation (FBI) and intelligence by operatives of the commission.

“The suspects have made useful statements and will be charged to court as soon investigations are complete,” the EFCC said.

SERAP condemns police raid of Nunieh’s home, says silencing her will not stop probe of NDDC

N2.3trn stimulus package will save MSMEs from collapse –Presidency