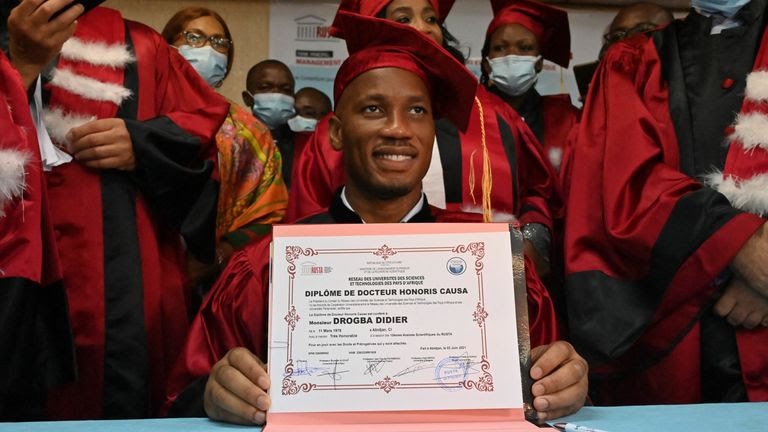 African football legend, Didier Drogba has been awarded a honorary degree at the University of Sciences and Technology of Africa network (RUSTA) in Abidjan.

The former Chelsea and Cote d’Ivoire striker was given the honour for his charitable work in the country, alongside his footballing contributions.

Drogba has also been credited for bringing peace to the West African nation, which had, prior to the footballer’s effort, been in a civil war.

Recall that in 2005, after Ivory Coast defeated Sudan to qualify for the 2006 World Cup, amid the war, Drogba invited TV cameras into the team’s changing room and made a speech begging his countrymen to end the conflict.

Read Also: Drogba announces separation from wife after 20 years together

That singular action by the 43-year-old has since been praised in Cote d’Ivoire as the at that led to a ceasefire after years of violence.

In 2007, Drogba was appointed a Goodwill Ambassador for the United Nations Development Programme and in 2009, he donated £3m of his endorsement with Pepsi for a hospital to be built in his hometown of Abidjan.

All these and more were considered by the administration of the Réseau des Universités des Sciences et Technologies (RUSTA), as it handed the legend a honorary degree.

Drogba enjoyed two spells at Premier League side Chelsea, scoring a total of 104 goals in 254 top-flight matches for the club.