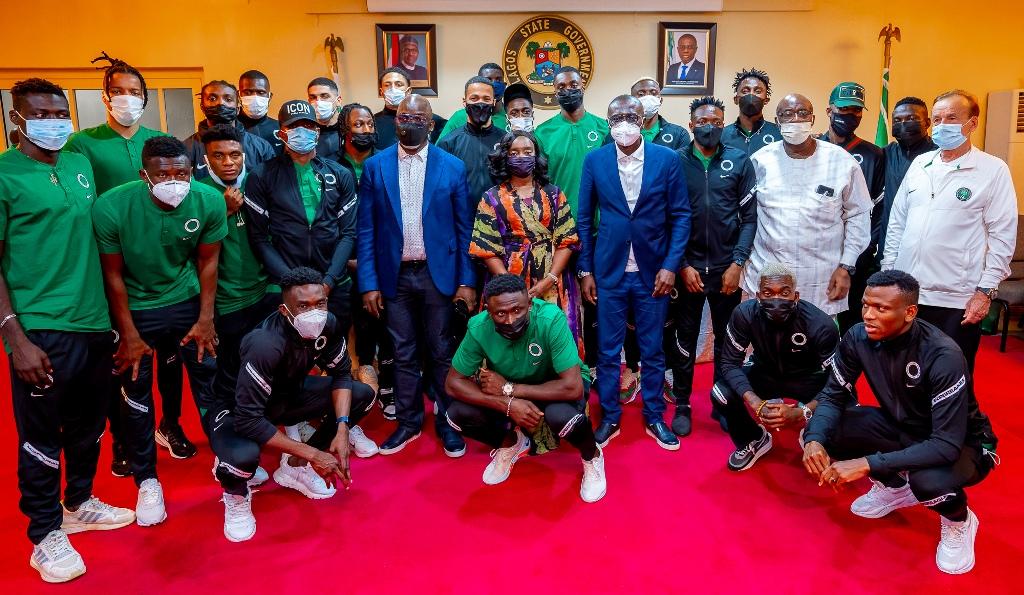 Governor of Lagos, Babajide Sanwo-Olu has charged the Super Eagles of Nigeria to do all they can to beat the Squirrels of Benin Republic and the Crocodiles of Lesotho.

The Eagles are on the brink of qualifying for next year’s Africa Cup of Nations (AFCON), needing just one point from the matchday five and six encounters of the qualifiers.

Sanwo-Olu, whose state is currently hosting the team ahead of the games, had a dinner with the coaching crew and players on Wednesday evening at Lagos House in Marina, where he urged them to win both matches.

“Sport is a unifier for all of us. Sports is a detribalized means of identification. Sports speak no language, it speaks no tradition, it speaks no religion. It is something that usually heals our country,” said the Governor.

“Even when things are down when we have security issues and all sorts of negative things in the country, you can use sports and football to heal that wound for us.

“And it is on that note that I want to charge you, encourage and appeal to you to do everything you can to win the matches.”

The Super Eagles will be facing Lesotho at the Teslim Balogun stadium in Surulere. It will be the first time since January 2001 that the team will be playing a competitive game in Lagos.

To this, Sanwo-Olu said he was very excited that the senior national team was returning to the state to play.

“When it was said that we are going to have the match in Lagos, we did not only jump at it, we saw it as an opportunity to rewrite our history again,” he added

Coach Gernot Rohr also commended Sanwo-Olu for his support for the team and for putting the necessary infrastructure in place at the Teslim Balogun Stadium.

The Super Eagles will be traveling to face Benin in Porto-Novo this weekend with the hope of inflicting a first home defeat in eight years on them, before returning to Lagos where they will play Lesotho next Tuesday.