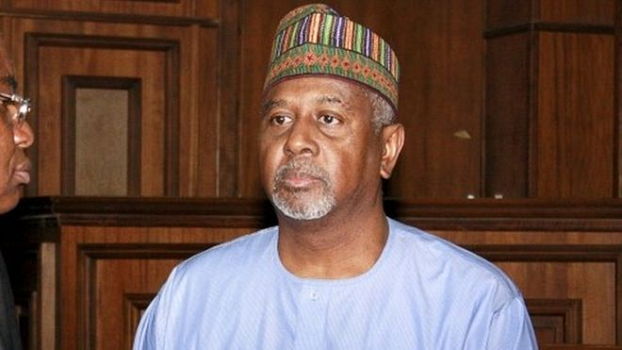 The federal government Thursday brought a 25-count amended charge against former National Security Adviser, Sambo Dasuki for the second time in 24 hours, but he was granted another bail by Justice Hussein Baba-Yusuf of an Abuja High Court after pleading not guilty to all the charges.

Dasuki has been in detention for over two years despite being granted bail by different courts.

Meanwhile, the federal government confirmed that it was turning a co-accused in the trial of Sambo Dasuki to a prosecution witness.

The former Director of Finance and Supply in the Office of NSA under Dasuki, Salisu Shuaib, who was initially charged alongside Dasuki, will now give evidence against the former National Security Adviser.

The counsel to federal government, Rotimi Jacobs, confirmed to journalists that after the examination of the report of the Economic and Financial Crimes Commission (EFCC) in the alleged money diversion, it became imperative to drop Shuaib from the charge.

Jacobs said that instead of being a co-accused person, the former director of finance will now be used to as a witness to testify for the federal government in the trial of the five defendants.

Like the re-arraignment of Wednesday, Justice Hussein Baba-Yusuf ordered that the five defendants should continue to enjoy the bail granted in 2015 when they were first arraigned on the alleged offense.

Part of the charge against Dasuki was that he misappropriated and engaged in alleged criminal breach of trust by dishonestly transferring N3.5 billion into the account of Dalhatu Investment Limited, an offense punishable under Section 315 of the Penal Code.

Yuguda was alleged to have dishonestly misappropriated a whooping sum of $9.8 million, an equivalent of N1.9billion and another N200 million he allegedly transferred to the bank account of Jabbama Ada Global Services, an offense punishable under Section 315 of the Penal Code Act.

On their part, Messrs Bafarawa, Sagir and Dalhatu Investment were charged with dishonestly receiving N4.6 billion from the office of Mr Dasuki, an offense punishable under Section 97 of the Penal Code.

Apart from the five defendants, prominent politicians were named in the charge as beneficiaries of the alleged public fund diversion.

They are a former governor of Oyo State, Rashidi Ladoja; former Chairman of the defunct National Republican Convention, Tom Ikimi; and one Robert Azibola, a cousin of former President Jonathan as well as former Secretary to the Government of the Federation, Pius Anyim.

All the five defendants pleaded not guilty to the amended charge dated May 11 and signed by Chile Okoroma, Director of Legal and Prosecution Department of the EFCC.

Justice Baba-Yusuf adjourned trial of the defendants to July 9 and 10.