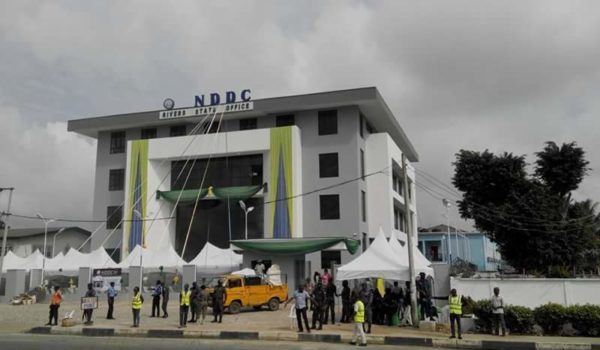 No event in recent history about the Niger Delta have elicited controversy or gained media attention like the current order by President Muhammadu Buhari calling for a forensic audit of the commission from 2001 to 2019. As at the last count, the leaders of groups such as; the Pan Niger Delta Forum (PANDEF), the Niger Delta Civil Society Coalition, Africa Network for Empowerment and Economic Justice, The Ijaw Youth Council (IYC) and other well-meaning Niger Deltans has risen stoutly, and filed behind Mr President’s decision to have the Commission’s books looked into as they(NDDC) cannot continue to claim they spent billions of Naira on projects, and when the place is visited, one cannot see structures on the ground.

Essentially, the directive aside manifesting signs of being used as an excuse stalling the inauguration of the Commission’s newly constituted board, what is, however, newsy about the entire development is that instead of the Commission to put their books together in readiness for the audit, they alleged that some governors from the Niger Delta states instigated the probe and are plotting to hijack the commission. An allegation the Governors has since distanced themselves from while describing it as baseless and unfounded.

Certainly, before this directive, I have heard a lot about NDDC in recent years and all that I have heard are both mystifying and misleading. As points to the fact that all may not be going on well in the relationship between the Commission and the people of the Niger Delta region they were established to improve their life chances.

Here are about two examples of such similar but separate stories/instances.

First and very profound was on October 16, 2017, after reading an editorial comment from the Gbaramatu Voice,-a community newspaper based in Warri, Delta state Nigeria, titled; NDDC; Now a body without a soul. Where the newspaper among other things, stated that; NDDC was established with a well mapped out mandate which includes the conception, planning and implementation, in accordance with set rules and regulations, of projects and programs for the sustainable development of the Niger Delta area in the field of transportation including roads, jetties and waterways, health, employment, industrialization, agriculture and fisheries, housing and urban development, water supply, electricity and telecommunication.

Noting that the organization in the early hours of the year 2000, religiously and rigorously carried out the above responsibilities particularly in the areas of transportation via the introduction of shuttle buses that eased transportation challenges in the region. But submitted that shortly after that project, it became deformed in goal and blurred in vision; reputed for project abandonment, and characterized by absence of accountability and transparency in its dealings while enjoying more moral burden than goodwill from the people of the region.

The second obvious sign that all was not appreciably well with the commission is an open letter dated May 20th, 2019 and addressed to the Executive Governor of Delta State, Senator (Dr.) Ifeanyi Okowa, by the Riverine communities in Delta state where the group bemoaned the non-presence of government projects in the coastal areas, and specifically lamented that the Niger Delta Development Commissions’ (NDDC), has suddenly become a ‘city boy’ preferring cities and towns for their projects. And alleged that even the little project carried out by NDDC in the coastal communities cannot be described as sustainable as they were achieved not only without excess environmental degradation but in a way that cannot protect the rights and opportunities of coming generations and contributes to compatible approaches.

And as a solution to the Commission’s non-presence advocated for the creation of Coastal Area development agency (CADA), as a way of ensuring the sustained development of the area.

From these two different but related accounts, there are ingrain factors/realities that further render NDDC’s allegation against the governors as spurious and ungraspable.

Admittedly, if as alleged that the governors instigated the audit, one may be tempted to ask; who compelled the Gbaramatu Voice in writing the above editorial comment or the coastal dwellers to send the above petition to the Governor?

Fundamentally also, if as alleged that the governors instigated the audit, it will be interesting to find out who was behind the Pan Niger Delta Forum (PANDEF), a 14-point communiqué which among other things described the poor state of critical infrastructure in the Niger Delta region, particularly roads, and thus calls on the Federal Government and relevant MDAs to give immediate and urgent attention to roads in the region?

What of the African Network for Empowerment and Economic Justice, and the Niger Delta Civil Society Coalition, where they were equally engineered by the governors to speak up against the inactions of the Commission?

Could it be possible that the governors from the region, media groups, organizations and Associations mentioned above at different times and places conspired against the NDDC? If this is the true position, then, that animosity in my estimation must be a very strong one.

The truth is that often, and of course, an organization/agency be it private or public like the NDDC can choose to fight on the basis of its real functional strength. Recognizing that service is a critical factor to the people, If NDDC had all these years aligned with the poor coastal dwellers through the development of the region infrastructurally, if they had made conscientious efforts to better their lives through the provision of people-purposed services, now that the federal government is demanding for their report card, the truth could have spoken for itself and all these blame games could have been avoided.

Without arguments, President Muhammadu Buhari in my views has the power to ask questions, and needs not the permission of the governors of the oil-producing states to direct the audit of the NDDC. After all, no governor of the region right from May 1999 can boast of clean hands. Specifically, while some of the governors from the region may have overtly contributed to the growing woes of the people of the Niger Delta region, others contributed in the hidden and subtle’ manner.

This assertion is based considering the volume of money that has gone to the region since May 29, 1999, such as the 13 per cent derivation, Amnesty settlements, NDDC special allocations, Ecological Funds, Monthly Revenue Allocation and Internally generated revenue(IGR), to mention but a few.

Finally, anybody/group instigated Mr President in this respect, one point the NDDC must not fail to remember is that it is our patriotic duty to save the region.