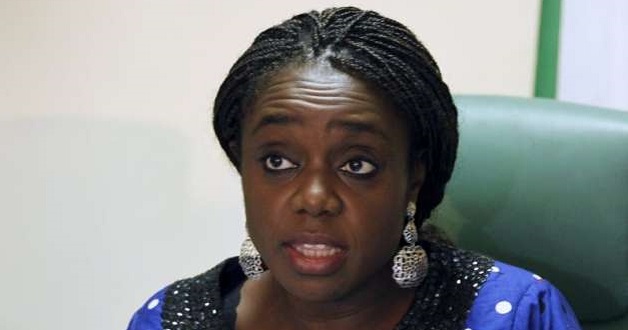 The travails of Minister of Finance, Mrs Kemi Adeosun, over an alleged forgery of National Youth Service Corps (NYSC) exemption certificate appears to be deepening as two suits seeking her sack have landed in court.

The two suits were separately filed by a lawyer, Mr Francis Obalim, and a political party, Action Peoples Party ( APP) on Monday before the Federal High Court in Abuja.

An online portal, Premium Times, had accused Adeosun of failure to possess a valid discharge certificate issued by the NYSC.

The platform claimed that an investigation into the matter, revealed that the minister forged the certificate, with which she gained an appointment as a commissioner, and later as a minister of the federal republic.

Obalim therefore, on the grounds of the report, in the suit marked FHC /ABJ / CS / 712 / 2018 , applied for an order quashing and setting aside Mrs Adeosun’s appointment as a minister of the Federal Republic of Nigeria by President Muhammadu Buhari.

His contention is that in the light of the revelation by the online medium, that Adeosun’s appointment should be quashed, for cirumventing the mandatory conditions in sections 12, 13 and 14 of the NYSC Act, an integral part of the 1999 Constitution.

According to the plaintiff, Adeosun, the 1st defendant, was not qualified to be employed by the Federal Government of Nigeria either as a minister of the Federal Republic of Nigeria or in any other capacity whatsoever, without first presenting a valid discharge certificate issued by the NYSC.

Obalim through his counsel, Mr Johnmary Jideobi, sought an order of perpetual injunction restraining Federal Government from further according a ministerial status to Adeosun until she presented a valid certificate of discharge regularly issued by the NYSC.

Aside Adeosun, other respondents in the matter are the Attorney General of the Federation, Mr Abubakar Malami; the Senate President, Dr Bukola Saraki; and the Clerk of the Senate.

In the other suit filed by the APP, the plaintiff not only prayed for the removal of Adeosun but also for an order directing her to refund the salaries she had received since 2015, when she was appointed as a minister, and another order compelling the Federal Government to prosecute her.

APP filed its suit through its lawyer, Mr. Kingdom Okere. It prayed the cout to among others, declare that Adeosun “is not qualified to be appointed a minister of the Federal Republic of Nigeria or into any other public office having not participated in the compulsory one-year NYSC scheme, as stipulated in the combined provisions of sections 11,12 , 13 and 17 of the National Youth Service Act.”

Defendants in the suit aside Adeosun are President Muhammadu Buhari, the AGF and the Independent Corrupt Practices and other related offences Commission (ICOC).

OSHIOMHOLE: CUPP is an alliance of dead parties