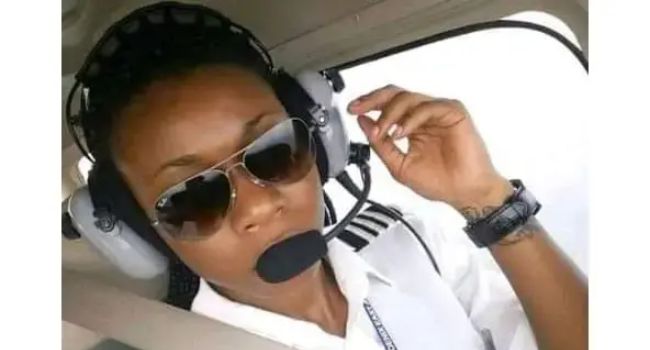 One of the two pilots who died in a plane crash in Cameroon on Wednesday, has been identified as Adzuayi Ewuga, the daughter of a former Minister of the Federal Capital Territory (FCT) Senator Solomon Eguwa.

The deceased was the second daughter of Senator Ewuga, a stalwart of the People’s Democratic Party (PDP) in Nasarawa State.

The small aircraft which had 11 oil workers on board was said to be flying from Yaounde Nsimalen Airport to Belabo in the east of the country when it lost contact with the Air Traffic Control, crashing in the process and killing everyone on board.

According to local media reports, the crash reportedly occurred in a forest about two kilometres north of Nsem in Cameroon.

“The aircraft was found crashed in a forest about two kilometres north of Nsem (Cameron) and the aircraft destroyed with no survivors. The aircraft was said to be carrying oil workers,” a report said.

The report stated that the mini-aircraft belonged to Caverton Aviation Cameroon, a subsidiary of Caverton Offshore Support Group, when it crashed while the workers were staff of a Cameroon Oil Transport Company who were on a chartered flight from Yaounde to Domta and were returning to Yaounde due to the weather.

This is not the first time Caverton Group’s helicopter will crash. In February 2019, the firm’s helicopter, which had Vice President Yemi Osinbajo on board, crash-landed in Kabba, Kogi State. Fortunately, no lives were lost in that incident.

No respite for students as ASUU, Nigerian govt meeting ends in stalemate

Top 10 stories from across Nigerian Newspapers, Friday May 13th 2022