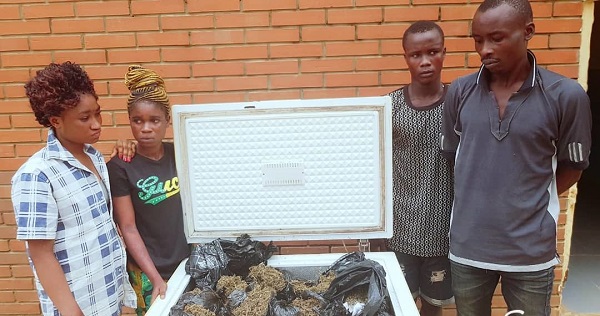 Two ladies and two young men were arrested in Ogun state while trying to sell Indian hemp (Cannabis) to targeted sales outlets from a deep freezer.

Operatives of the Ogun state Police command arrested the suspects at Iperin black spots in Agbara on Saturday during a raid by a team led by the Divisional Police Officer, Adegbite Omotayo.

They were caught with the weed filled deep freezer, which they were passing off as meant for sales of soft drinks.

According to the statement, the suspects had confessed to being major distributors of the substance in Agbara area.

It was also explained that they always use the freezer to distribute it to their sales outlets to avoid detection by security agents, according to the

Oyeyemi, a Deputy Superintendent of Police (DSP), added that the Commissioner of Police in the state, Bashir Makama, has directed the suspects should be transferred to the state Criminal Investigation and Intelligence Department (SCIID) for discreet investigation.