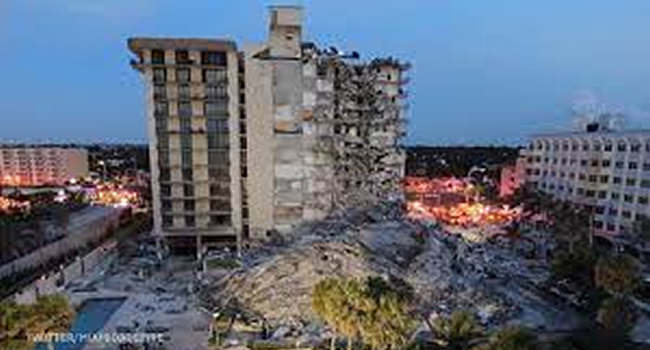 Four people have been confirmed dead while 159 are still missing after a residential building partially collapsed in Surfside, Florida, United States, on Thursday night.

The mayor of Miami-Dade, Daniella Levine Cava, who confirmed the incident on Friday at a press conference, said the bodies were pulled from the Champlain Towers South wreckage overnight, though none of them have been identified.

“Tragically, I woke up to learn that four bodies had been pulled from the wreckage overnight,” she said.

The Mayor described the development is “devastating news for families waiting for any hope for survival.

She added that so far, 102 people have been accounted for, “and that number is way up from the original count so we are very, very grateful.”

The collapsed esidential building, according to records, is located at 8777 Collins Avenue, a few miles north of Miami Beach.

It was built in the 1980s, and had 12 stories, 136 units, while 55 apartment units collapsed, according to Ray Jadallah of the Miami-Dade Fire Rescue.

Related Topics:BuildingCollapsedeathFloridaMiamiMissingunited states
Up Next