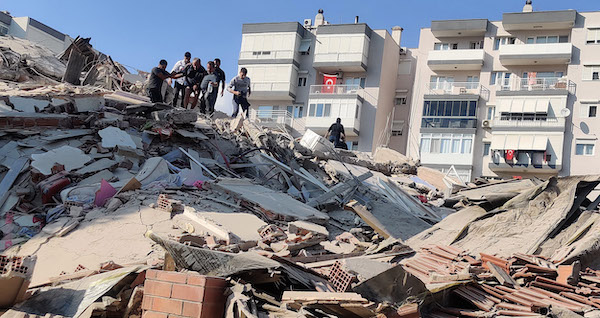 Rescue officials have confirmed the death of no fewer than four people and the wounding of 120 others after a strong earthquake struck the Aegean Sea on Friday.

Reports say both Greece and Turkey were affected by the 7.0 magnitude earthquake which damaged buildings with many said to be trapped in the rubble.

Witnesses also said that people flooded into the streets in the Turkish city of Izmir after the earthquake hit, with the wreckage of multiple-story buildings in the city’s centre seen with people climbing out to escape.

Izmir Mayor Tunc Soyer told CNN Turk about 20 buildings collapsed while Ilke Cide, a doctoral student who was in Izmir’s Guzelbahce region during the earthquake, said he went inland after waters rose when the earthquake struck.

“I am very used to earthquakes … so I didn’t take it very seriously at first but this time it was really scary,” he said, adding the temblor lasted for at least 25 seconds.