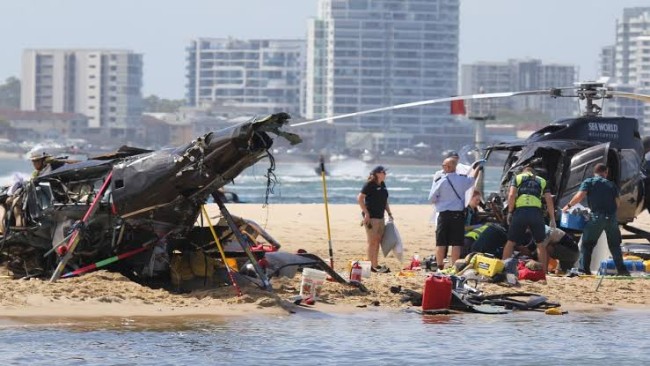 Four people have been confirmed killed as two helicopters collided in mid-air on Monday at Australia’s Gold Coast tourism center, according to police in a statement.

The police added that three other persons were in critical condition, with images on social media showing one of the aircraft’s rotors lying on a sandbar, with the police describing how bystanders had rushed to haul passengers from an upside-down helicopter.

“One helicopter had flipped over on the exposed sandbank a few feet from the shore”, the statement said, adding that the other helicopter appeared to be largely intact at the accident scene near the Gold Coast’s popular Sea World marine theme park.

“Those two aircraft, when collided, have crash landed, and landed, on the sandbank just out from Sea World resort,” Queensland police service acting inspector, Gary Worrell, said at a news conference at the scene.

“As a result of that, four people have lost their lives today. Three others are critical in hospital,” he added.

“One of the helicopters appeared to have been taking off as the other was landing. The helicopter that landed safely had lost its windscreen. The other airframe has crashed and it was upside down,” Worrell said.

Related Topics:Australiahelicopter crash
Up Next