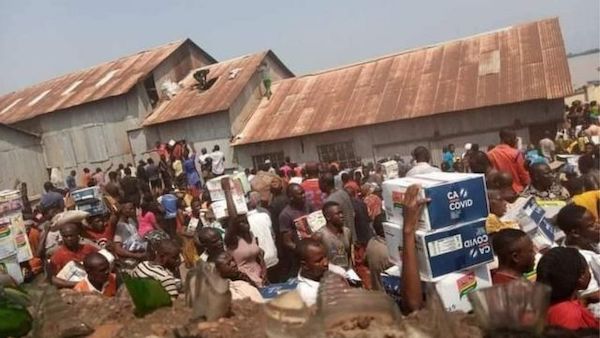 The nationwide looting of COVID-19 palliatives warehouses has reportedly claimed four lives in Lokoja, the Kogi State capital, with several others injured.

According to reports, the deaths and injuries occurred when hundreds of people on Sunday stormed the Kogi State warehouse in Lokoja to cart away the remaining palliatives from the building.

The warehouse, located along the Murtala Mohammed way, very close to Kpata market in Lokoja was invaded as early as 7 am since Saturday to Sunday by mostly women and youths who stormed the place for covid-19 palliatives.

Sources say the death occured as a result of the stampede that followed after the gates were thrown open for people to move in and take palliatives.

The state government, reports say, had last week commenced the distribution of COVID-19 palliatives to all the 21 local government areas.

Reacting to the development, the state Commissioner for Information and Communication, Kingsley Fanwo, denied reports that anyone died.

Fanwo said: “No one was killed. There were reports of injured persons. They have been treated. Some of them already discharged.”

Otedola reacts to #EndSARS protests, pledges support for the needy